Controversy surrounds a flag flying at the OPPA Barrie building

BARRIE, ONT. -- There is controversy swirling around the flying of the Thin Blue Line Canadian flag outside the Ontario Provincial Police Association building in Barrie.

At a time when police officers are being scrutinized and slammed, the traditional red and white maple leaf flag outside the police union office, on Ferris Lane in Barrie, has been replaced with a double blue maple leaf flag.

Lewis said it's clear the police union, which represents 6,000 uniformed officers and 3,000 civilian members, is sending a clear message to boost confidence and solidarity among the ranks amid recent calls for the defunding of police following protests across North America.

"It's a very thankless job. I mean, many police departments are running shorthanded, and some of the things they're being criticized for - they're doing it because police are the fallback response to everything now because there's not enough funding for those agencies."

In a series of statements responding to questions from CTV News regarding the presence of the double blue Canadian flag, the union's president, Rob Jamieson, said its red and white flag is ripped and needs to be replaced. He added that the double blue flag has flown since June 29 instead. 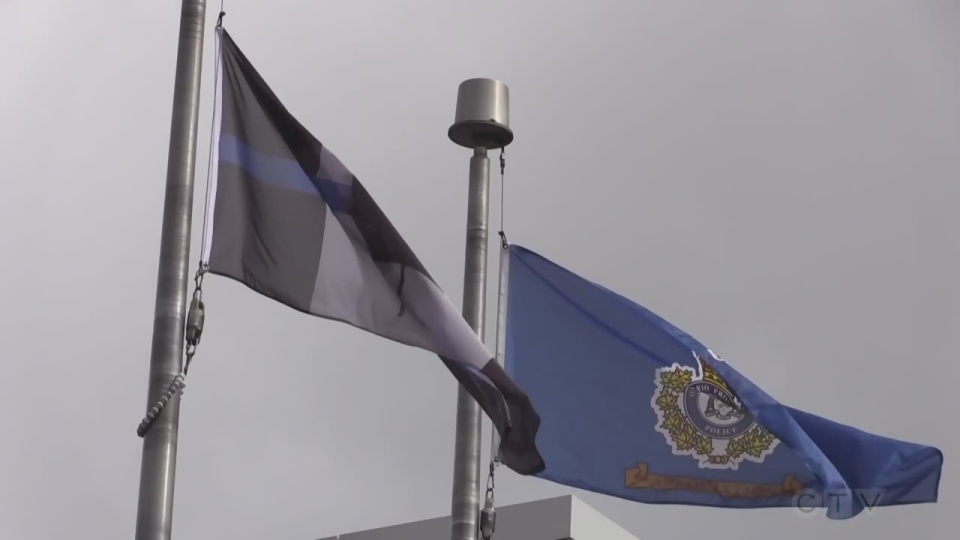 The union confirmed it purchased 60 flags at the cost of more than $3,000. It is unclear where or how the "thin blue line" flags will be distributed to the OPPA membership. No OPP detachments visited by CTV News over the past few days fly the double blue flags in Simcoe County.

Jamieson said the flag was flown to support members and honour the lives of officers lost in Halifax and Abbotsford, B.C.

"The OPPA Board wished to support the family of RCMP Officer Heidi Stevenson and all fallen officers through a 'Blue On Blue' campaign that was led by an OPPA member and his wife, an RCMP member related to line of duty death of RCMP Constable Heidi Stevenson in the Nova Scotia Shooting incident," Jamieson said.

He added police officers represent the 'thin blue line' between good and evil for honourably serving and protecting our communities.

The president said sales from the flag had raised $100,000 to date for slain RCMP officer Stevenson's family and charitable causes.

"The police community display this flag to represent support, solidarity and respect to our fallen heroes," said Jamieson. "The dark colour of the flag is purposely subdued to show respect. The 'Thin Blue Line' symbolizes the police line between good and evil, for honourably serving and protecting our communities, principles that Heidi Stevenson stood for, and gave her life for."