What causes tornadoes and why are they hitting our region?

Storm trackers from Environment Canada were in our region on Wednesday and confirmed a separate tornado touched down near Orangeville on Tuesday.

About thirty trees were uprooted and fattened on Gary Grant’s property in Amaranth. He felt right away a tornado touched down Tuesday afternoon.

“Tremendous amount of shaking and vibration, the trees were bent right over the ground around the house.”

Late Wednesday afternoon officials confirmed it was an EF-1 tornado. Throughout Amaranth trees have been toppled and snapped like twigs. Even trailers have been flipped and crushed. Severe weather meteorologist Arnold Ashton says the extent of the damage is telling.

Tuesday’s tornadoes touched down exactly a week after the devastating tornado that tore through an Angus subdivision and Innisfil the same day. Ashton says four confirmed tornadoes in such a short period of time are not surprising.

“Mother nature likes patterns and was in a pattern with the steering flow in the jet stream in the area. We’re getting incursions and warm and muggy along cold fronts, warm fronts.”

That collision of warm and cold air causes a tornado to happen in the first place.

“You need kind of twisting winds in the atmosphere so that gives a certain spin if you will on the storm and in the centre of the storm you can then get a focused vortex forming that can cause a tornado,” added Ashton.

According to Environment Canada, an average of 17 tornadoes touch down in Ontario ever year. The peak season is between June and August. 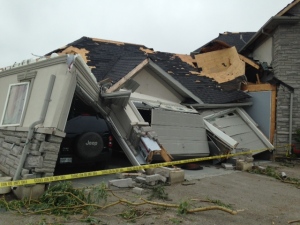 Ontario hammered by another storm