'We had seconds to get to the basement,' Chatsworth, Ont. hit by powerful 170kph winds

Experts now believe the powerful storm that hit Chatsworth, Ont. over the weekend could be the work of an EF2 tornado.

A team of experts from the Northern Tornadoes Project visited the area on Sunday and said the tornado left a trail of destruction 13.5 kilometres long.

"It's definitely upper end of EF1, which is 170 kilometres per hour, but we are thinking it might even be stronger than that, so we might upgrade this to EF2," said Dr. David Sills, executive director with Northern Tornadoes Project. 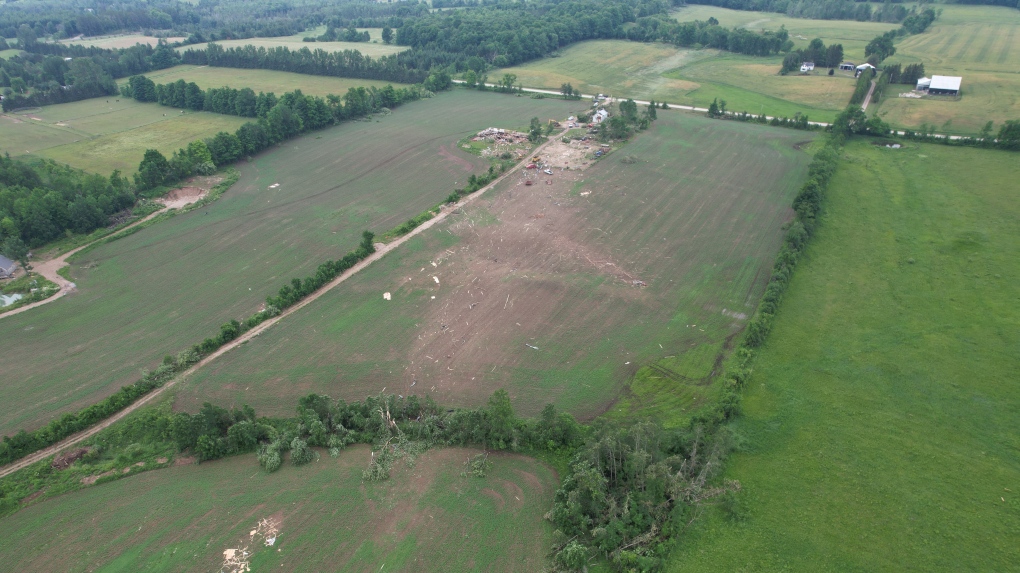 Drone footage shows the impact of a tornado that touched down in Chatsworth, Ont. on Sat. June 26, 2021 (Photos courtesy Northern Tornadoes Project UWO)

Walters Falls resident Kayley Devitt said she received three warnings on her phone before the sky turned dark. "It was a minute before it actually hit, and we had seconds to get to the basement, and we just ran."

Devitt's home was damaged by falling trees that snapped like twigs in the powerful winds.

According to Sills, meteorologists first confirmed the tornado touched down northeast of Chatsworth when airborne debris was spotted on radar.

"Then you know you have got a tornado," Sills said. "There was a tornado warning issued very soon after that was seen."

Devitt said the warning gave her family the time they needed to get to safety.

She said volunteers showed up soon after it hit to help clean up. "They did in 20 minutes, no questions asked. They worked so hard, and I would love to be able to thank them."

On average, there are roughly a dozen tornadoes each year in Ontario. Saturday's destruction marks the third tornado so far, plus a waterspout on Lake Erie.