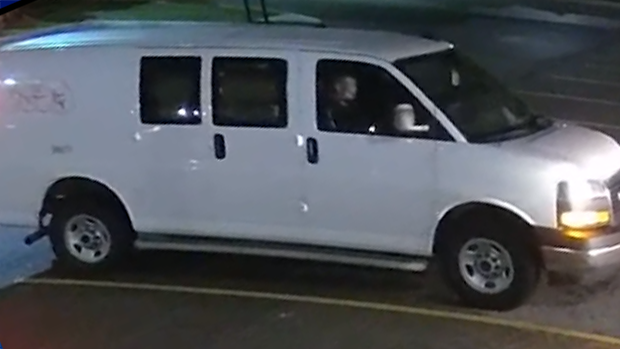 A white cargo van is captured fleeing the scene of a break-in in Barrie, Ont., police say. (Barrie Police Services)

Police in Barrie are investigating a swift overnight break-in and theft at a business in a south-end plaza.

Officers responded to an alarm at a business in the plaza on the corner of Mapleview Drive West and Loughheed Road around 2 a.m. on Sept. 13 and arrived to find a "badly damaged glass door."

Police say the suspects had fled the scene just minutes before they arrived.

"The suspects were in and out of the business very quickly and left in the same vehicle that they arrived in, a white cargo-style van that had a spray-painted design on the rear right (passenger side) corner," Barrie police stated in a release.

Police hope to identify the suspects. The first has dark hair, pulled back in a bun, possibly Asian, 20 to 30 years old, with a thin build, jeans and black shoes with green bottoms and white laces. He also wore blue gloves, a dark jacket and a blue mask.

The second suspect is a white man, roughly 20 to 25 years old, with a thin build, black gloves, black shoes with white soles, black pants, and a distinct camo hoodie with 'RAPTORS' around the opening of the hood and down the sleeves in white letters. He also wore a blue surgical mask.

Police ask anyone with information to call Barrie police at 705-725-7025 ext. 2676 or Crime Stoppers to remain anonymous.

Food prices in Canada will continue to escalate in the new year, with grocery costs forecast to rise up to seven per cent in 2023, new research predicts.

Ukrainian officials reported a new barrage of Russian missile strikes across the country Monday, an attack that was anticipated as Russia seeks to disable Ukraine's energy supplies and infrastructure with the approach of winter.

Bob McGrath, an actor, musician and children's author widely known for his portrayal of one of the first regular characters on the children's show 'Sesame Street' has died at the age of 90.

Former U.S. President Donald Trump faced rebuke Sunday from officials in both parties after calling for the “termination” of parts of the U.S. Constitution over his lie that the 2020 election was stolen.