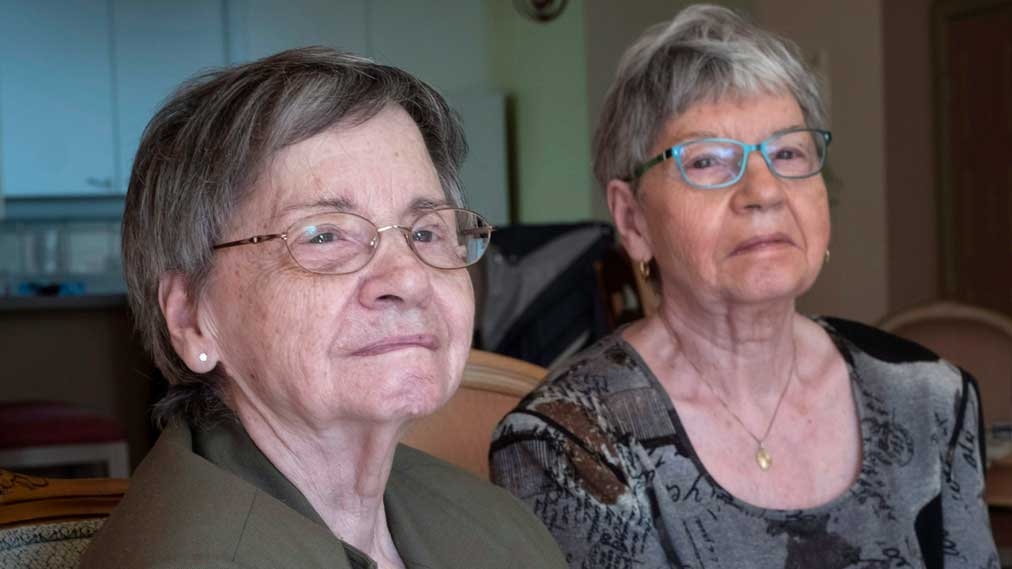 Cecile Dionne, left, and her sister Annette are seen Thursday, May 18, 2017 in St-Bruno, Que. (THE CANADIAN PRESS/Paul Chiasson)

The two surviving Dionne quintuplets will be returning this week to the log cabin where they were born 84 years ago for a ceremony marking their birth as an event of national historic significance.

A spokesman for the sisters said Cecile Dionne and Annette Dionne will be travelling to their birth home in North Bay on Sunday. A commemorating plaque will be unveiled during the ceremony at the home, which has been turned into a museum.

Carlo Tarini said the sisters will be visiting the cabin for the first time in 20 years and have asked to take a photo with local children.

"It's a very touching event for the sisters. They are very happy, they are very pleased to be able to return on that occasion," he said.

The five Dionne sisters became international sensations upon their birth on May 28, 1934 as they were the only known quintuplets at the time to survive for more than a few days.

"They were in fact pretty much the initial Kardashian kids, generating a huge amount of media coverage," said Tarini.

The Ontario government took the quints from their parents and turned them into a tourist attraction for the first nine years of their lives, bringing in about $500 million to the province.

In the 1990s, three surviving Dionne sisters reached a $4-million settlement with the province after raising concerns about the alleged mismanagement of a trust fund that had been set up to provide for their future.

"There was a lot of suffering for the sisters as part of their childhood," he said. "So on Sunday what we want to do is talk about the good that can come out of their existence and their survival. It is truly a story of survival and about ensuring the proper raising of children."

The quints were born near the village of Corbeil just south of North Bay. Their birth home was bought by the city of North Bay, brought there in 1985 and turned into a museum dedicated to the family's story.

Ed Valenti, chair of the Dionne Quints Heritage Board, said Annette will be donating five dolls to the museum that she and her sisters grew up with.

The Dionne Quints Museum closed to the public in 2015 after the city's chamber of commerce stopped running it, and the resulting struggle to find another operator prompted officials to suggest moving it to the nearby community of Strong, Ont.

A group of residents rallied against the proposal, lobbying city council for months until it was voted down in favour of moving the home locally. The cabin was hauled to a new spot in North Bay last November.

Miles Peters, director of the Dionne Quints Heritage Board, said Cecile and Annette want to take photos with local children in front of the museum to "focus on the love and proper care of children."

"Their primary concern is that history does not repeat itself," said Peters. "I am hopeful that we are entering a new beginning void of exploitation.