SEVERN, ONT. -- Trumpeter swans are a rare sight in Ontario because of the disappearing habitat and an abundance of hunters.

Years ago, a group of volunteers successfully reintroduced trumpeter swans to Six Mile Lake in Muskoka, but a tragic shooting has put the life of one in jeopardy and outraged those who dedicate their time to nurturing their survival.

"This is a criminal act, a malicious attack to do this," exclaimed Anne Lewis.

Lewis and her husband have been feeding a trumpeter swan named Luna since 1999 when the bird was born.

Lewis said the swan and her cygnets visit every day, twice a day, and when she stopped coming to be fed, Lewis and her husband knew something was wrong.

"People on the lake are enraged that this could happen. It's hard to believe that their neighbour could do this," Lewis said.

An X-ray revealed seven pellets lodged inside the swan.

The injured bird is now being cared for at Shades of Hope Animal Rehab Centre in Pefferlaw. 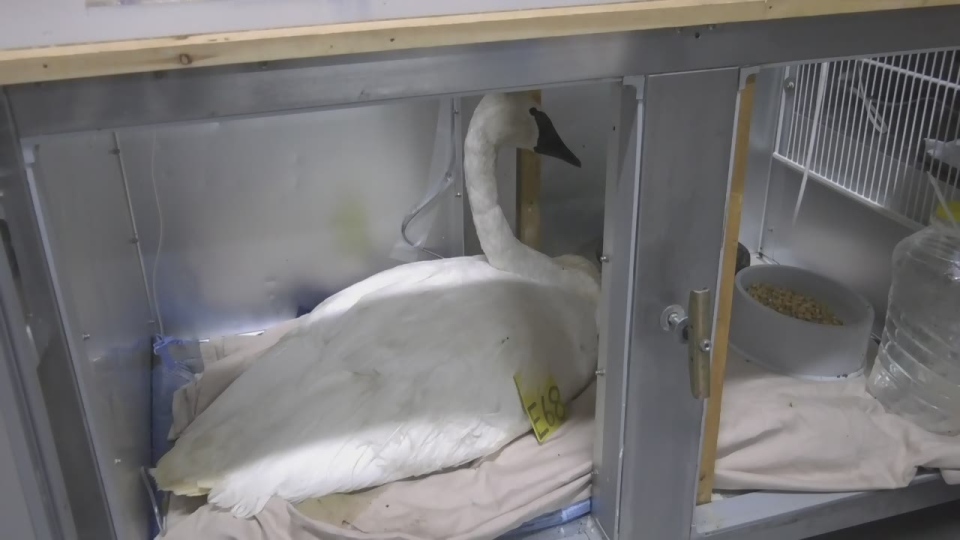 "As for where the pellets are, she is in too weak of a condition to go searching for them in surgery.

Purvis believes a shotgun may have injured the swan, which is on medication and in an incubator.

"She's thin, so she has probably been struggling for a little while," Purvis added.

Luna is being monitored closely; her lead levels are dangerously high, so high in fact, the centre's machine can't measure it. "Her lead levels are higher than 65 micrograms per deciliter of blood," Purvis said.

While the outlook for Luna's survival may be grim, the centre staff has hopes of a recovery.

"She isn't improving, but she certainly hasn't deteriorated in any way, which is a good sign," Purvis added.

If Luna does survive, the Trumpeter Swan Society plans to ensure she is reunited with her family.