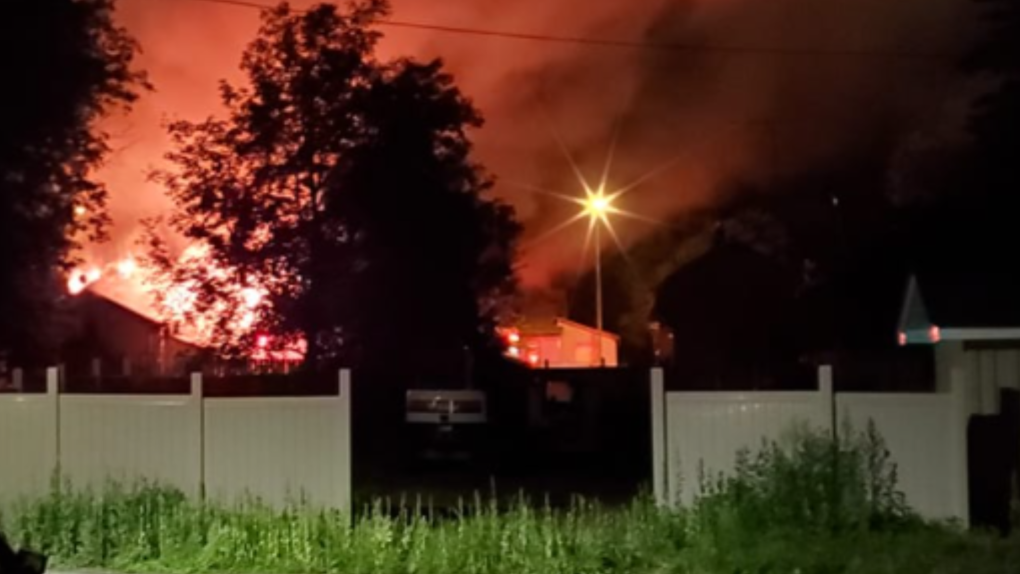 Three people were sent to hospital, one in critical condition after an early morning house fire near Charleston Side Road and Hurontario Street in Caledon, Ont. (Courtesy: Mike Godfrey)
Barrie, Ont. -

Three people are in hospital, and one is in critical condition after an early morning fire Wednesday in Caledon.

Caledon Fire and Emergency Services and Peel Paramedics responded to the home on Hurontario Street north of Charleston Side Road shortly after midnight.

Peel Paramedics tells CTV News one of the people taken to hospital was in critical condition, and two others had moderate injuries.

Caledon Fire Chief Darryl Bailey said the damage to the home is extensive.

The road was closed at Highway 10 and South Beechgrove Sideroad until around 6:30 a.m.

One lane remains closed as of 10 a.m.

The town of Caledon tweeted shortly before 10 a.m. that the Ontario Fire Marshal is on scene and the investigation is ongoing.

No damage estimate was available.

2/ One firefighter reported symptoms of CO poisoning but has since been checked and cleared. The Ontario Fire Marshal is on scene, investigations continue. No estimate of damages yet. @ONFireMarshal #Caledon #CaledonFire

Candidates are making their final appeals to voters today ahead of tomorrow's federal election. The three main party leaders have packed schedules as they try to reach as much of the electorate as possible.

With election day fast approaching, Indigenous, Black and people of colour in Canada are wondering why racism and issues about race have taken a backseat on the campaign trail.

With just two days until election day, the Conservative Party won't say whether they will require any candidates elected to be members of Parliament to be vaccinated against COVID-19 before heading to sit in the House of Commons, in contrast to the positions of the Liberals, NDP, and Bloc Quebecois.

Female employees in the Kabul city government have been told to stay home, with work only allowed for those who cannot be replaced by men, the interim mayor of Afghanistan's capital said Sunday, detailing the latest restrictions on women by the new Taliban rulers.

Emmy Awards host Cedric the Entertainer and the show's producers promise it will be a celebration for all. But it could be much more rewarding, even historic, for some.

Scientists studying whether it's possible to grow, eat mRNA vaccines

Scientists at the University of California, Riverside are currently studying whether they can turn edible plants into mRNA vaccines.

National Day for Truth and Reconciliation is Sept. 30, but some provinces won't make it a stat holiday

On Sept. 30, federal offices, banks and post offices will be closed to mark the first National Day of Truth and Reconciliation, but Alberta, Saskatchewan, New Brunswick, Quebec and Ontario have said they’re not officially observing the day as a paid day off.