Officers from South Simcoe Police were back at Sandy Cove Acres on Saturday, canvassing the quiet community and asking residents like Vernon Bates what they saw Friday morning.

“I see our neighbour across working on her flower beds so I just said good morning to her.”

Bates was one of the last people to see his 81-year-old neighbour alive. It was just before noon and Bates says he saw another neighbour, Richard Dowdell, arrive at the home across the road. He knew Dowdell lived just down the street and often mowed lawns to make extra money.

Another neighbour says she saw Dowdell and the homeowner walk along a path towards the back of the house. About 15 minutes later police arrive on scene. None of the neighbours CTV News spoke to on Saturday said they heard any screams come from inside the house.

“Our dog just kept barking and we looked outside and there were about ten cruisers in front of the house,” says Christine Hemty.

The 911 call came from inside the home but police will not say if it was the victim or the accused who placed that call. While CTV News has learned the identity of the woman killed, the family has asked that her name not be released. Richard Dowdell has been charged with first degree murder – meaning police believe this murder was planned.

“We feel there was premeditation, that how’s we’ve laid the charge of first degree murder but I don’t want to go into how we arrived at that at this time,” says Detective James Buchanan with South Simcoe Police.

Buchanan says police are still in the early stages of their investigation. He says it could take them days to gather all the evidence inside the home and are awaiting the result of an autopsy which is scheduled for Sunday.

No one answered the door at Richard Dowdell’s home on Saturday afternoon. Neighbours say they are still in shock over what happened – still trying to come to terms with losing a beloved neighbour.

Dowdell appeared in court Saturday morning via video. He will be back in court on Friday, June 6 for a bail hearing. 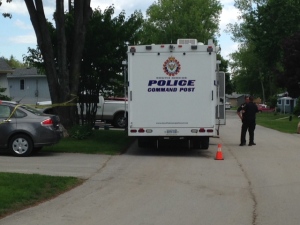