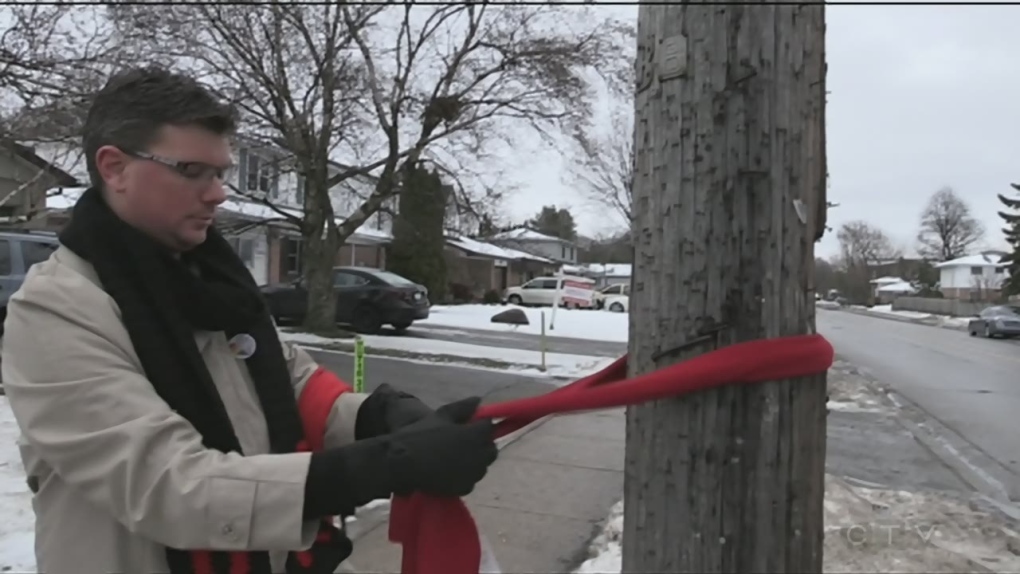 A red scarf is wrapped around a pole in Barrie on Saturday to recognize national AIDS/HIV Awareness week, November 25, 2018 (Rob Cooper/CTV News)

In recognition of National HIV and AIDS awareness week, eight-hundred red scarves will be tied around posts and poles across Simcoe County.

Gilbert Centre Executive Director, Gerry Croteau, says there’s a lot of stigma and negativity surrounding HIV and the red scarves help bring awareness to a disease which is now considered a chronic condition.

“Forty-seven per cent of HIV infections are still among gay men or within the LGBTQ community,” said Croteau. “It's important to keep that message going, and keep people aware that they need to practice safer sex.”

With approximately 150 clients, the Gilbert Centre in Barrie works with people who are HIV positive, part of the trans community, as well with gay men to provide social services support.

One client is Randy Davis who was diagnosed with HIV in February of 2015. Davis says the medication he takes daily allows him to live his life as he pleases.

The pill suppresses the level of the HIV virus in Davis’ blood which makes it undetectable and not transmittable sexually. He says the disease can be confusing, which is why he supports projects like the red scarf.

“These campaigns are extremely important to raise awareness (and) to educate folks,” said Davis. “It’s that fear and ignorance surrounding HIV that causes the stigma that really keeps people from getting tested.”

A big message with this year’s campaign is for people to get tested, and reduce risks. Choteau stresses to the public that HIV is now considered a chronic disease, and the more people are aware, the healthier they`ll be.

“Not knowing your status, not getting tested is a risk,” said Croteau. “You don't know you can be HIV positive upwards of ten years before you even know you're HIV positive.”

According to Croteau, in the past, anyone diagnosed with HIV would have taken multiple pills throughout the day. Today’s one pill each day gives those living with the disease a better outlook on life.

“The side effects are less toxic on the body,” said Croteau. “People are more aware so they keep healthier. They exercise better. They have better diets, and there's a more positive if you will outlook as to the longevity of those. It's no longer a death sentence.”

Red scarves will be dropped off in communities in within Simcoe County including Midland, Orillia, and Bracebridge later this week.