Rare bird has flown into Barrie 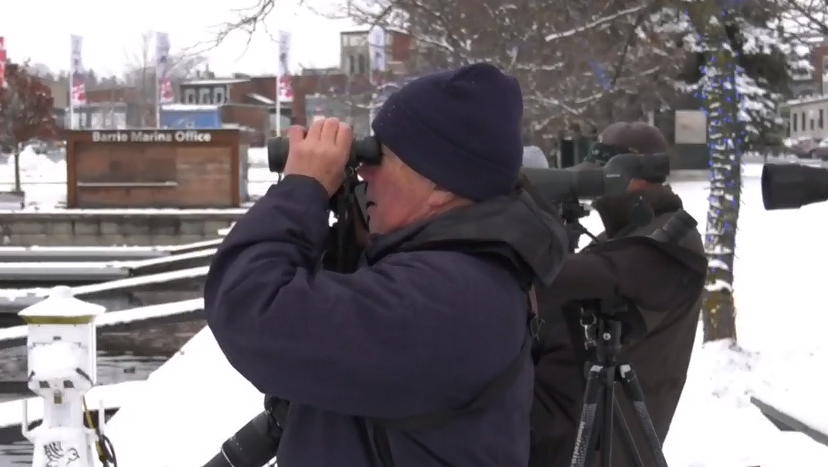 There is a new celebrity in town, and it has birdwatchers from across Ontario flocking to Barrie's marina hoping to get a glimpse.

"This is a big event for us," said avid birder Mark Carnford. "I was getting minute-by-minute updates on the way up on the bus."

Mark Carnford came in from Toronto this morning home to see the rare bird for himself.

It was first spotted on Saturday, and the glaucous-winged gull has quickly become the talk of the town.

"It's a coastal species of gull, and it's not even found inland very often so for it to be found all the way over here is really unusual," said Christopher Evans with Nature Barrie.

The gull is a common sight on the pacific coast of British Columbia and has only been spotted in Ontario once before in Sault Ste. Marie.

For many birdwatchers in Ontario, it's a once-in-a-lifetime opportunity, and it has many asking why is it here?

"Maybe some of that climate change, you know climate chaos is part of the reason for it," Evans said.

Colleen Reilly drove in from Burlington Tuesday and was one of the first to spot the gull that morning.

"There's a number of gulls here, and I was like which one is it which one is it, and then I saw it, and it was amazing," said Reilly with Pipits Birding Group

Evans said there are a couple of critical things to look for if you're hoping to spot the rare bird.

"It's going to be hard to find because there are so many gulls here," said Evans. "This particular one is very brown-looking. Its tail and the tips of its wings are the same colour like a light brown colour."

The identification of the gull hasn't officially been confirmed, but experts and birders say it's the real deal.

As for how long the rare creature will stick around for, no one really knows.