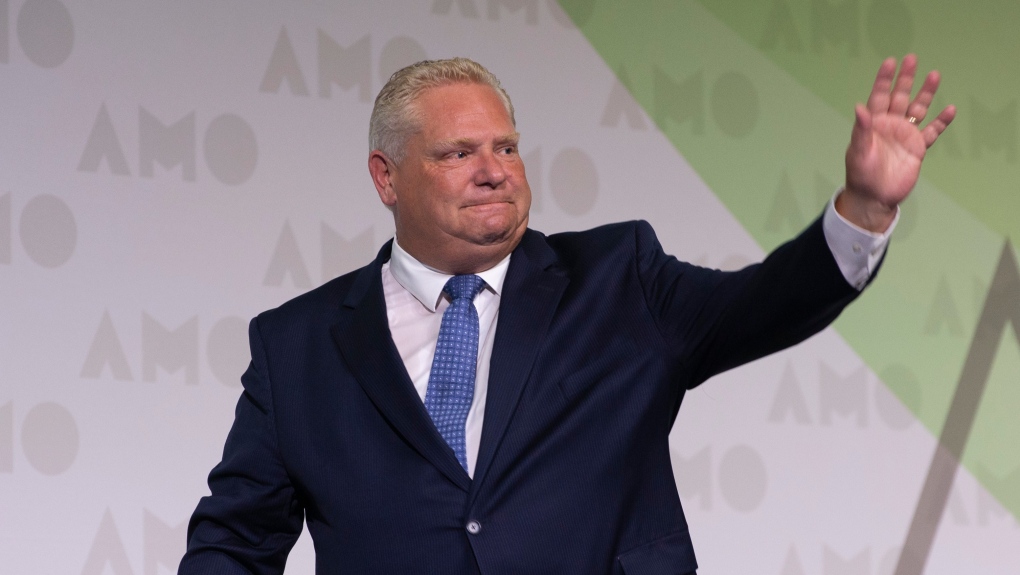 Premier Doug Ford officially kicked off his re-election campaign on Sat February 22nd, even though the vote is more than two years away.

NIAGARA FALLS, ONT -- Ontario Premier Doug Ford kicked off his re-election campaign on Saturday night, a move he makes more than two years ahead of the next provincial election and on the same day union activists vowed to fight his government ahead of that vote.

Ford made the declaration during an 18-minute keynote address at the Ontario Progressive Conservative policy convention in Niagara Falls, Ont., a gathering intended to jump-start platform development for the 2022 election.

"Good jobs, safe streets, and a government that works for the taxpayer, not the other way around," he said. "My friends, the 2022 campaign starts today, starts now."

Ford used his remarks to rally his supporters and highlight his government's accomplishments, saying he believes his party will be competitive everywhere, even NDP-held ridings with strong union bases across the province.

"I'm telling you," he said. "(People are) looking for any excuse, any reason to vote PC in the next election."

But Ford's speech inside the convention centre struck a dramatic contrast to the scene outside the event hours earlier.

During a raucous rally, labour leaders introduced the spectre of a union-led general strike to fight public service cuts and pledged to fight the Ford government.

The Ontario Federation of Labour organized the event and that group's president said activists must fight to save public services.

Coates, and several other speakers at the rally, suggested a co-ordinated effort to push back against government cuts in a general strike is possible.

"If the Conservatives don't listen to us, if they don't hear the people of Ontario say enough is enough, we will shut this province down," Coates said.

Sarah Labelle, of the Ontario Public Service Employees Union, also said a general strike could be the next move organized labour makes if the Ford government doesn't change course.

"If it takes a general strike down the road, we're not scared," she said.

The protest came a day after thousands of teachers marched around the Ontario legislature to protest stalled contract talks with the government.

The joint walkout by all four major teachers' unions marked the first time since 1997 that educators from all the labour groups were on strike on the same day.

The teachers' unions have said they are pushing back against government attempts to increase class sizes and introduce mandatory online learning courses.

The government has said the key issue in bargaining is compensation, as they offer educators a one per cent raise while the unions ask for a cost of living adjustment closer to two per cent.

The leaders of three teachers' unions attended the rally on Saturday, with the president of the Elementary Teachers' Federation of Ontario urging the crowd to stand with educators.

"They're attacking us," Sam Hammond said. "But my friends, make no mistake, you're next. This is a much bigger fight."

NDP legislator Wayne Gates, who represents the riding that includes Niagara Falls, slammed the government for making cuts to the province's classrooms.

"We have the best public education system in the world," he said. "Why the hell would you want to tear that down?"

"We're always willing to listen to anyone who brings their opinions forward," he said. "I don't remember the last political conference I've been to that didn't feature some form of protest at it."

Most of the convention was closed to the public and media over the weekend. The exception will be a keynote speech from Ford on Saturday night.

Calandra defended the secrecy surrounding the gathering, saying the party wants to keep policy deliberations "within the family."

"As we develop those policies and platforms for the next campaign, that our members, our grassroot members, would like to have that opportunity to have those discussions in private," he said.