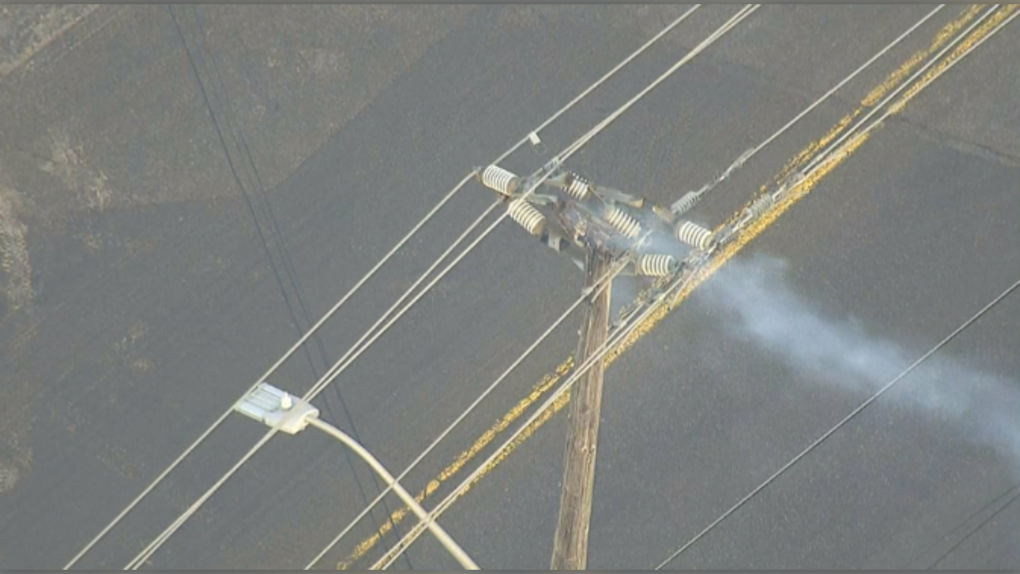 A hydro pole fire like the one in this file photo, was smouldering in Georgian Bay Monday morning. Twenty Hydro One customers are currently without power, Sept. 26, 2022 (CTV NEWS)

Residents in Big Chute are without power Monday morning.

Georgian Bay Fire Services received a call about a fire at Old Mill Road and White Falls Road at 7:43 a.m.

"We have a hydro pole that is smouldering," said Tony Van Dam, director of fire and emergency services with the Township of Georgian Bay

"Our crews are waiting for hydro to show up," Van Dam said in the early morning.

Three of his units were on scene as the pole continued to smoke.

Hydro spokesperson Tiziana Baccega Rosa said the approximately 20 Hydro One customers affected would be without power for the remainder of the morning.

While the federal government was successful in procuring COVID-19 vaccines amid an urgent pandemic situation, the Public Health Agency of Canada (PHAC) fell short when it came to minimizing the number of doses wasted, according to Canada's auditor general.

The Canadian branch of human rights organization Amnesty International says it was the target of a cyberattack it believes was sponsored by the Chinese state.

Critical injuries in plane crash on Highway 401 near Cornwall, Ont.

Two occupants of a small plane were seriously injured when it crashed into the Highway 401 median near Cornwall, Ont. Monday night.

In what researchers are calling a scientific breakthrough, scientists behind a new study may have found the biological reason we get more respiratory illnesses in winter. It turns out the cold air itself damages the immune response occurring in the nose.

A flu season that started early, hospitalized far more children than usual and overwhelmed emergency departments has revealed that Canada's health-care system is chronically underfunded when it comes to the most vulnerable citizens, a pediatric infectious diseases specialist says.

Execs from grocery giants push back against inflation profiteering claims

A Loblaw executive is disputing an accusation that the grocery giant is taking advantage of inflation to drive up its own profits.

Actress Kirstie Alley, star of the big and small screens known for her Emmy-winning role on "Cheers" and films like "Look Who's Talking," has died after a brief battle with cancer, her children True and Lillie Parker announced on her social media. She was 71.

A Quebec civilian judge has acquitted Maj.-Gen. Dany Fortin of sexual assault over an allegation that dates back to 1988. Judge Richard Meredith said he believes the complainant was sexually assaulted, but said the Crown did not establish beyond a reasonable doubt that it was Fortin who had assaulted her.