BARRIE, ONT. -- A restaurant in Huntsville, Ont., has closed its doors after the health unit confirmed at least one person infected with COVID-19 dined at the establishment.

Jeff Suddaby, owner of 3 Guys and a Stove, said public health officials notified him Sunday that the infected person had been at his restaurant on August 2nd, one week prior.

Still, Suddaby admitted he knew reopening was risky. "We had pretty strong chances that something like this was going to happen."

The health unit reported a group of 30 people travelling together visited Muskoka over the August long weekend, and since then 11 of them have tested positive for COVID-19.

Suddaby said he took immediate action after getting the call from health officials. "Our protocol was simply, we would automatically shut down. The individual that served the table is in isolation," he said. "We were not ordered to shut down, but we decided to do it ourselves for the safety of our staff, their families and, of course, our customers." 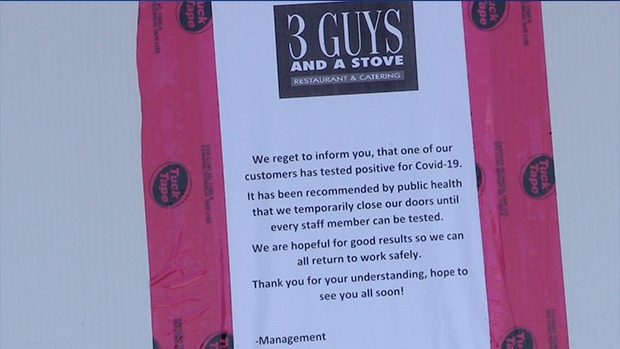 Suddaby sent his staff home and asked that each be tested for the virus.

The group of visitors stayed at Deerhurst Resort. "It was a larger family, 30 people in total," said Jesse Hamilton, Deerhurst's general manager.

Hamilton said learning that some of the group were infected with the virus one week after their stay at the resort was "alarming."

But like Suddaby, Hamilton said the resort had protocols in place in the event something like this happened. "It's a situation we've been preparing for since we opened the doors. I feel like we were very well prepared for it."

The health unit flagged one employee at the resort for potentially being at risk after coming into contact with the guests. Hamilton said they learned this morning that the employee tested negative. He credits their use of face masks and hand sanitizing for helping to protect staff.

Hamilton said the resort staff aim to keep an eye out for large group bookings, but it's not always possible. "These guests, although they travelled as a family, they didn't book as a family. So sometimes there's not the opportunity for us to know who's travelling with who."

Local health officials haven't released where the 30 people visited from, only confirming they are not from Simcoe Muskoka.

Dr. Charles Gardner, Simcoe Muskoka District Health Unit's medical officer of health, said there was no evidence of any other individuals having come in contact with the families while they were in Muskoka.

Suddaby said he plans to reopen on Friday if his staff members all come back with negative test results.

Muskoka is a popular tourist destination, and Suddaby said while it's good for business, there is the chance they could go through this once again.

Massive outbreaks in Israeli schools a 'cautionary tale' for Canada

Why you shouldn't be worried about getting the coronavirus from food

COVID-19 outbreaks in schools will be hard to avoid. Experts say creative solutions are needed to stop them

Routine dental visits should be delayed where there is still community transmission: WHO