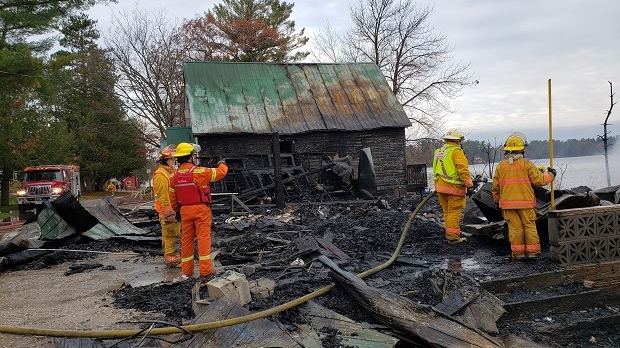 The Stanton Brothers store was destroyed by fire in Port Stanton, Ontario, on Wed., Oct. 28, 2020. (Supplied)

BARRIE, ONT. -- A landmark in Port Stanton was devastated by a raging fire overnight on Wednesday.

Officials said an employee of the Bayview Wildwood Resort called in the fire, which was fully involved a the store by the time crews arrived.

The flames destroyed the old Stanton Brothers Convenience Store and attacked a nearby cottage at the resort. Five people escaped the cottage uninjured.

The blaze caused the store to collapse on itself. The steel roof contained the flames, making it challenging to extinguish.

Crews were on scene for more than 10 hours battling the flames as family members gathered, watching history go up in flames.

The store was a fixture in the area for more than 100 years but had not been operational for some time, other than selling fuel to boaters.

Officials said the cause is not suspicious, but it may never be determined because of the extensive damage.