Police are on the lookout for a woman accused of snatching packages from front porches in Bradford.

According to South Simcoe Police, the 'porch pirate' stole packages from at least four homes in the Line 6 and Simcoe Road area on Friday afternoon.

Police say they received reports that someone attempted to take a package from a porch in the same area on Sunday.

Police released security camera images of the woman and the vehicle involved.

The suspect has a thin build and was wearing jeans, a bright yellow jacket, a grey or white sweater and a hat.

The suspect vehicle is a grey SUV with the licence plate JATT PUT. 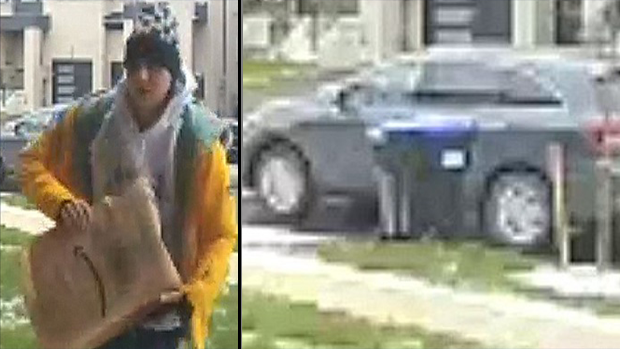 Police warn that daytime porch pirate thefts take only seconds and offer tips to prevent packages from being stolen, including tracking deliveries, removing items immediately or having a neighbour grab them, and using a safe drop or locked mailbox for packages.

Police ask anyone with information on this incident to contact them or Crime Stoppers.