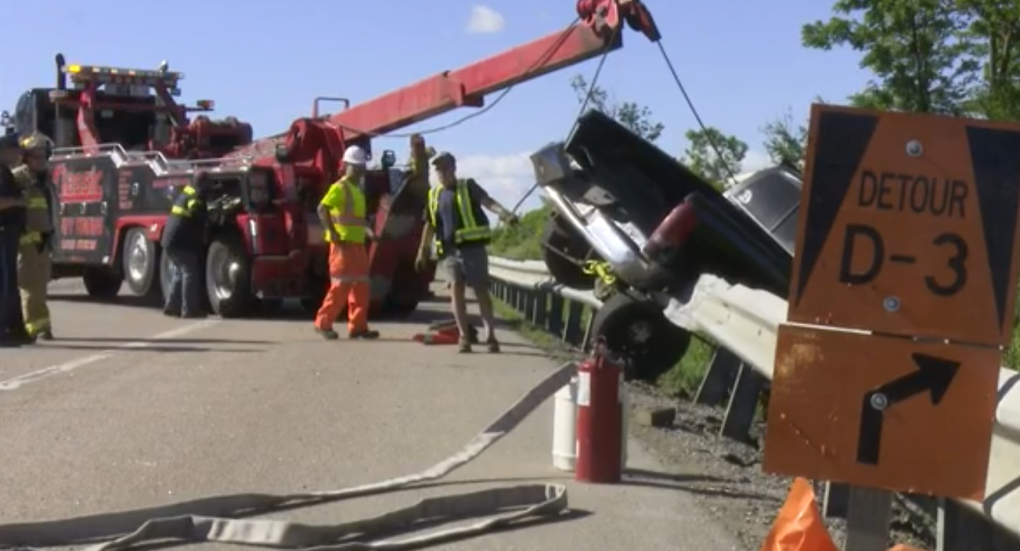 Emergency crews pull a pickup truck off of a guard rail, following a crash on Highway 400 in Barrie, Ont. on Wednesday June 22, 2016. (Brandon Rowe/ CTV Barrie)

Charges have been laid, following a crash that halted the morning commute on Highway 400 in Barrie.

According to the OPP, a large gravel truck lost its load on the highway as it was heading south near Mapleview Drive.

The driver of a second pickup truck had to swerve to avoid the falling rocks and ended up hitting a car.  A 13-year-old girl in that car was taken to hospital with minor injuries.

The driver of the second pickup truck has been charged with careless driving.

"Nobody was able to obtain any particulars on that truck, a license plate or a company for us to follow up on.  It is unfortunate because gravel haulers are responsible for the load that's in their truck, and he actually caused this accident,” says OPP Const. Rick Tarnowski.

Investigators are now asking for the public’s help in locating that truck. Anyone with information is asked to contact police or Crime Stoppers.

“Truckers are reminded that they are responsible for that load in their truck, and enforcement will be taking place if we catch truckers losing loads off the back of those gravel haulers.”