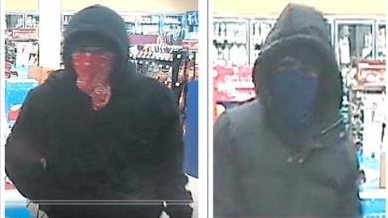 An image of two suspects police say were involved in a convenience store robbery in Newmarket on November 24, 2020 (Courtesy York Regional Police)

BARRIE -- York police are looking to the public to help identify two men wanted in an alleged convenience store robbery in Newmarket.

Police were called to the store located in the area of Davis Drive and Leslie Street shortly after midnight on November 24, where investigators believe the suspects entered the store armed with handguns and made demands for cash.

The first suspect is described as 5'6" with a medium build. He was last seen wearing a puffy black jacket, blue bandana, with black and white shoes.

The second suspect is described as 5'9" with a medium build. He was last seen wearing all black clothing, a red bandana and black boots.

Anyone with information is asked to call York Regional Police or Crime Stoppers.