Police and onlookers gather as Hells Angels ride through Newmarket

Police and onlookers gather as Hells Angels ride through Newmarket

Police kept close watch as an estimated 800 to 1,000 motorcycles rolled through Newmarket on Thursday.

Crowds gathered to witness the Hells Angels memorial ride and listen to the revving of hundreds of motorcycles.

"You'll never see it again in Newmarket," he added.

News and police helicopters kept an eye on things from the sky while officers on the ground directed traffic along Davis Drive, west of Highway 400.

It took roughly 15 minutes for the sea of leather and steel to leave town and get traffic moving again.

"When you get a large gathering of that nature, whether it's persons or vehicles, it can cause a lot of disruption in the area, so we were strictly for public safety here," noted York Regional Police Const. Amy Boudreau. 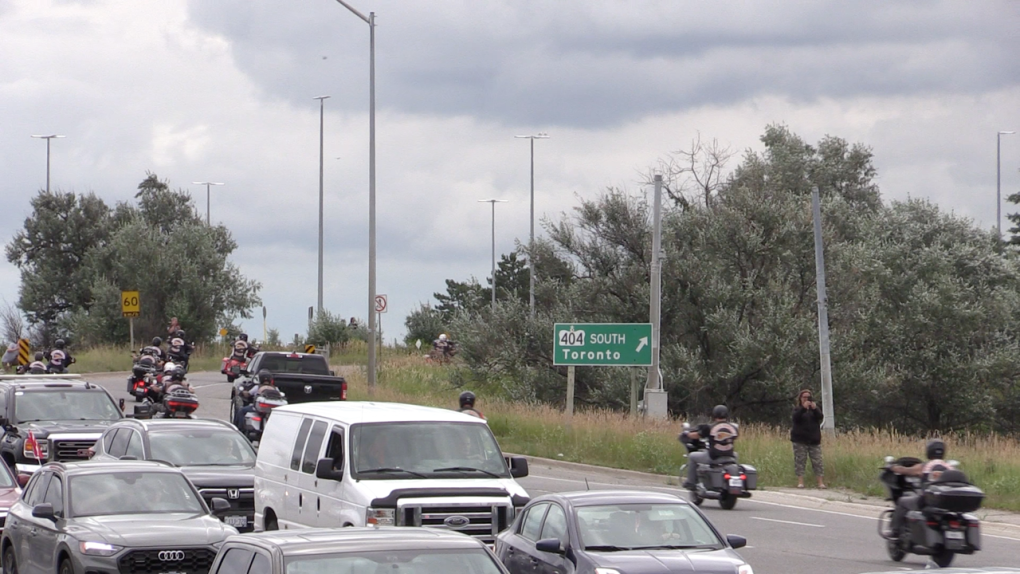 According to members, the unsanctioned procession paid tribute to Toronto Hells Angels president Donny Peterson who died before Christmas.

With police officers close behind, the Hells Angels gang - notorious for its involvement in drug and weapons trafficking - made its way from Newmarket to Toronto, heading south along the highway as onlookers lined overpasses waving and cheering.

According to police, one motorcyclist was injured in a crash and taken to the hospital. No charges were issued during the procession.

An unnamed Hells Angels member who spoke with CTV News said this weekend's festivities planned in Whitby would be the largest rally in several years.