Barrie police are investigating after vandals defaced a plaque honouring a fallen hero, with derogatory imaging etched onto the sides.

"We are saddened and disappointed that someone would make an effort to damage such an important monument that recognizes our colleague and friend Billy Wilkins," said Chief Corey Mainprize, Barrie Fire Services.

Firefighter William (Billy) Wilkins died on May 27, 2002, while responding to a house fire in the area of Anne Street North and Livingston Street West in Barrie.

The 32-year-old became the city's fourth firefighter to lose his life in the line of duty.

"He cared about his community, and he always did the best he could as a firefighter and always cared about the people he served," said Mainprize. 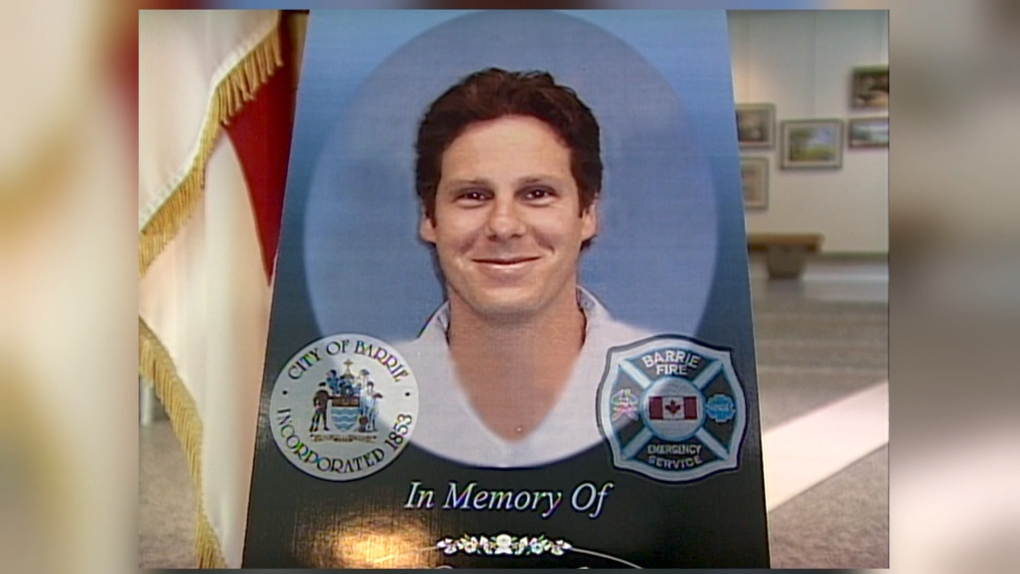 A recognition ceremony was held in honour of William Jonathan Wilkins.

Just over two decades after Wilkins's death, on September 16 the community of Barrie came together to honour the fallen firefighter by naming a local park after him, along with a monument built in his memory.

"It is a space that our team and members could go to and remember Billy and take a moment to honour him, along with those who would walk by and see the plaque," said Mainprize.

The City of Barrie said it was notified the monument had been damaged with multiple scratches containing what it says were inappropriate images.

"What was done to that plaque is totally unacceptable. Damage was done to it unnecessarily by individuals who don't seem to care about what Bill's sacrifice means to the community and his firefighting community," said Peter Leon, Barrie Police Services.

Barrie police added they do not believe the incident was targeted in nature.

"It is just incredibly disappointing that someone would vandalize it. Someone just made a very poor decision," said Mainprize.

According to the City, the plaque was removed for repairs, which are expected to take several weeks.

Police are appealing for information and asking anyone who may have witnessed the incident to come forward or contact Crime Stoppers.

Canada has sent one of its military planes to Haiti to help the country cope with escalating violence. A joint statement today from National Defence Minister Anita Anand and Foreign Affairs Minister Melanie Joly says Canada has deployed a CP-140 Aurora aircraft to help 'disrupt the activities of gangs' in Haiti.

Canadian researchers are drawing attention to the increasing prevalence of 'a pathological pursuit of muscularity' among Canadian boys and young men, with a new study that found one in four were at risk of developing what's known as muscle dysmorphia.

On Tuesday in Ottawa, Canada's 13 premiers and Prime Minister Justin Trudeau will sit around the same table in person for the first time since COVID-19 hoping to find a path toward a new long-term health-care funding deal.

A former Israeli prime minister who served briefly as a mediator at the start of Russia's war with Ukraine says he drew a promise from the Russian president not to kill his Ukrainian counterpart.

Justice Minister and Attorney General David Lametti says he is open to amending bail laws, which have come under increased scrutiny following the shooting death of an Ontario Provincial Police officer.

The U.S. military on Saturday shot down a suspected Chinese spy balloon off the Carolina coast after it traversed sensitive military sites across North America. China insisted the flyover was an accident involving a civilian aircraft and threatened repercussions.