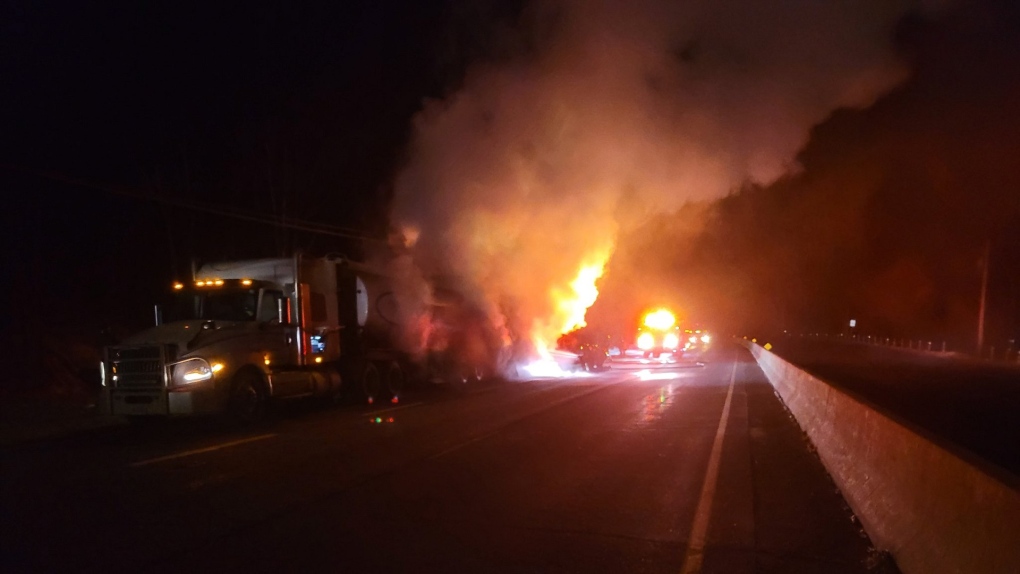 The Gravenhurst Fire Department and Muskoka EMS were also called to attend.

Police say it was a tractor-trailer hauling fuel that caught on fire. However, it was not related to the fuel that was being hauled. Another vehicle was ordered to transfer the fuel.

Southbound lanes were reopened at about 5 a.m.; however, the right lane heading northbound near Sparrow Lake Route D remains closed until the transfer of fuel is complete, and the vehicle is removed.

Nobody was injured during the event.

The federal Liberal government is joining the Opposition Conservatives in no longer allowing its members of Parliament to expense taxpayers for home internet services.

Canadians fighting in Ukraine, despite no monitoring from government, speak out on war and loss

On Feb. 27, 2022, Ukrainian President Volodymyr Zelenskyy said his country needed fighters, and foreigners were welcome to join the front line in the defence against Russian aggression. Some Canadians were among the first to answer the call.

Canada is sending four combat-ready battle tanks to Ukraine and will be deploying 'a number' of Canadian Armed Forces members to train Ukrainian soldiers on how to operate them.

True crime sells, but fans are debating the ethics of their passion

For some people, relaxation looks like settling down with a nice glass of wine and the most graphic, disturbing tale of murder imaginable.

Retailers and tech companies use many tools to mine consumers for data they can share with third parties, but there are steps consumers can take to protect and safeguard their personal information.

No reason for alarm in Canada after cough syrup deaths in other countries: health agency

Following the deaths of more than 300 children from contaminated cough syrups in several countries, Health Canada says it's been more than a decade since similar cases were identified here.

Rent prices in Canada grew at a record pace last year as the country saw the lowest vacancy rate since 2001, the Canada Mortgage and Housing Corp. said.

The independent body that oversees the safety of technical systems and equipment in British Columbia has found a deadly ammonia leak near Kamloops last May was a tragedy that took years to unfold.

Ottawa police and Bylaw Services are telling residents and visitors they will be taking a zero-tolerance approach to parking, noise and fireworks violations downtown this weekend, on the one-year anniversary of the 'Freedom Convoy' demonstration.