Parent company of Swiss Chalet, Harvey's to phase out plastic straws by 2019 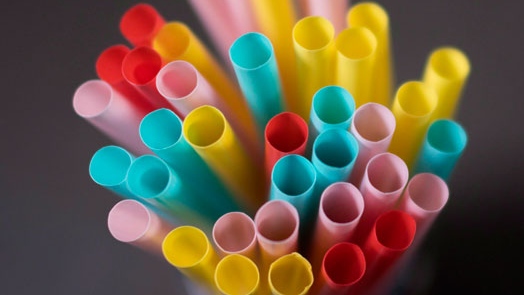 Plastic straws are pictured in North Vancouver, B.C. on Monday, June 4, 2018. Estimates show up to 10 million tonnes of plastic garbage ends up in the oceans each year, and across the oceans there are multiple islands of trash, including one in the Pacific that rivals the size of the province of Quebec. THE CANADIAN PRESS Jonathan Hayward

TORONTO -- It's the final straw for plastic at Recipe Unlimited Corporation.

The restaurant giant, formerly known as Cara Operations, will start to ditch plastic straws at its 19 brands in August and replace them with compostable and biodegradable paper straws by the end of March 2019.

The company, which owns brands such as Harvey's, Swiss Chalet, Kelsey's and New York Fries, joins a growing group of Canadian restaurants and international food corporations that are phasing out the plastic drinking implements.

Recipe Unlimited, which has 1,382 restaurants, says compostable and biodegradable straws will automatically be provided with drink orders at its quick serve brands, including the Burgers Priest and St-Hubert. Paper straws will be available on request at its full-service restaurants like the Pickle Barrel, The Keg and Milestones.

"Straws are just one component of the work we're undertaking to eliminate single use plastics from our supply chain and shift to recyclable or compostable materials wherever possible," Frank Hennessey, Recipe Unlimited's chief executive officer, said in a statement.

A&W Canada said last month it would soon switch to paper straws, while Ikea Canada promised to phase out plastic straws by 2020. Plenty of local bars and dining establishments have made similar declarations.

McDonald's announced in June that it will switch to paper straws at all its locations in the United Kingdom and Ireland, and test an alternative to plastic ones in some of its U.S. restaurants later this year. However, a McDonald's Canada spokesman said it would monitor the trials in those countries before taking steps in Canada.

The shift comes amid global pressure from environmentalists demanding restaurants switch to compostable options in an effort to stop wildlife from getting stuck and injured by plastic and to prevent the material from littering coastlines and green spaces.

Experts say Canadians use about 57 million straws a day, but less than 20 per cent are recycled. They often recommend paper, metal or wood straws as alternatives.

However, plastic straw bans have also generated concerns among some people with disabilities who say they need them and worry that sweeping bans will have unintended consequences.

Still, many restaurants appear to be moving ahead with phasing out the plastic version.

Restaurant Brands International, which owns Tim Hortons, Popeyes Louisiana Kitchen and Burger King, said Wednesday that it is reviewing its packaging and looking at alternative options.

Their considerations come after Vancouver city council recently put forward a proposal pushing servers to ask customers if they want a straw, instead of automatically delivering one with drink orders.

On top of the recent environmental push, food industry expert Robert Carter said millennials -- the restaurant industry's biggest customer base -- are playing a big role in the move away from plastic straws.

"This is a segment that skews towards cause-based issues, so I think that is also putting pressure on restaurants to get ahead of these things before they have a backlash," he said.

He anticipates that the influence of millennials will soon extend beyond straws to target other plastic restaurant goods, including cutlery and packaging, because that consumer base often uses food delivery services, which are "exploding." However, materials related to beverages are only a "tiny component" of the plastic items such services distribute, he said, making them ripe for change.

Across the pond, British Prime Minister Theresa May is also eyeing a ban on plastic straws, cotton swabs and stir sticks and prodding other nations to follow suit.

Canada has yet to make a similar commitment, but Carter believes "it is only a matter of time before it comes to North America."