Pair tries to steal cart filled with $950 in items from grocery store: police 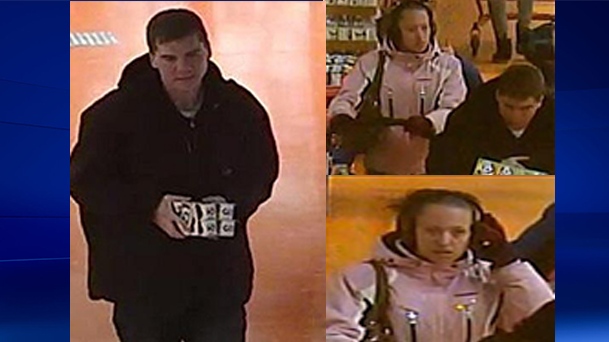 Barrie police released these images of two suspects accused of trying to steal nearly a thousand dollars in items from a Loblaws in Barrie, Ont.

Police say two people ran out of a Barrie grocery store with a cart nearly overflowing with items, and then tried to pass off the theft with a fake receipt.

According to Barrie police, the pair was seen tossing items into a cart at the Loblaws on Bayfield Street on Tuesday afternoon.

The cart contained several things, including two cases of beer, cookies, candy and items from the health and beauty section. The value of the items has been estimated at $950.

Police say the woman first exited the store, followed by the man with the cart. A security officer was able to catch up with the pair just south of the store.

The man attempted to show a receipt, but when the officer didn’t seem convinced, the pair left the cart and fled the scene.

The first suspect is described as a clean shaven white man, 5’10 to 6’, with a medium build and short brown hair. He was seen wearing a black jacket, blue jeans, and black and white shoes.

The second suspect is described as a white woman, 5’1” to 5’4”, with a long ponytail. She was wearing a pink ski jacket and purple ear muffs.