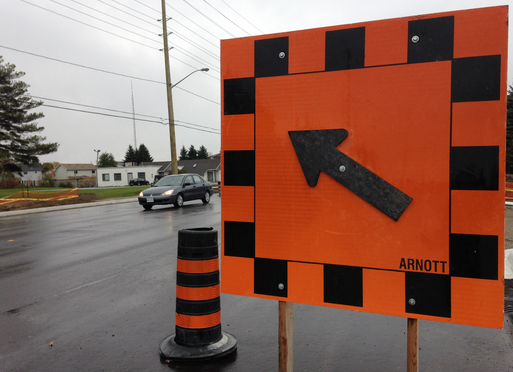 Emergency services attended a collision involving a pick-up truck and a motorcycle shortly before 11 a.m.

The motorcycle driver, a 26-year-old male, sustained minor injuries as a result of the incident and he was taken to hospital for treatment.

The 55-year-old female driver of the pick-up truck was also brought to hospital as a precaution.

Both vehicles were damaged and had to be towed from the scene.

Traffic flow was slowed due to lane reductions for vehicles travelling both eastbound and westbound on 10th Street.

The investigation into the cause of the collision is ongoing.

Wood from primary forests in British Columbia has been used to fuel the U.K.'s largest power plant, according to a BBC investigation; the company denies the allegations.

With COVID-19 on the rise, should you be wearing a mask again? Here's what experts say

Cases of COVID-19 are increasing across the country again as fall progresses and winter approaches. But this respiratory pathogen season is different than last year's, experts say, so the public's approach should be different as well.

Scientists have uncovered an association between tumours and fungi, which may lead to a deeper understanding towards the biology of certain cancers.

As MPs kicked off a study on the future of the House of Commons' use of a hybrid sitting structure, Speaker Anthony Rota is calling for members of Parliament to consider the 'big picture' in making their recommendations as to whether it's time to retire the virtual elements of proceedings that were ushered in response to the COVID-19 pandemic.

Russian troops abandoned a key Ukrainian city so rapidly that they left the bodies of their comrades in the streets, offering more evidence Tuesday of Moscow's latest military defeat as it struggles to hang on to four regions of Ukraine that it illegally annexed last week.

Excluding the CAQ, Quebec's major provincial parties received similar results between them in terms of popular support. But the same can't be said for the number of seats they won.

Loretta Lynn, the Kentucky coal miner's daughter whose frank songs about life and love as a woman in Appalachia pulled her out of poverty and made her a pillar of country music, has died. She was 90.

'Disappeared without a trace': Kitchener family pleads for help after daughter goes missing in B.C.

Jaqueline McDermott, 22, from Kitchener has been reported missing in B.C., and her family is putting out a plea across the country for help.