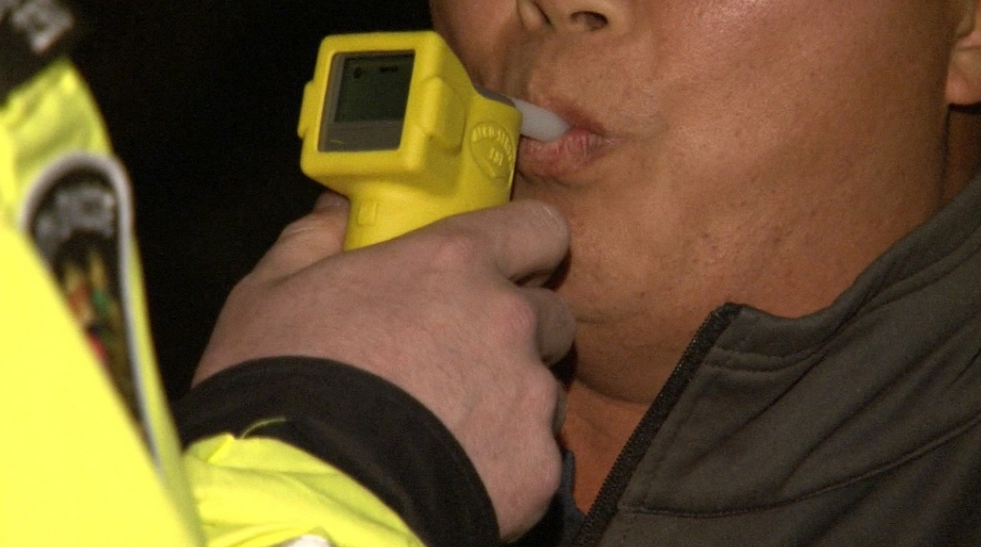 A police officer holds a breathalyzer as a man blows into the device. (FILE IMAGE)

According to provincial police, officers were called to the area of Rosemary Road around 10 p.m. on Oct. 14 after multiple vehicles were reportedly hit.

Police quickly located the vehicle, which had become lodged in a ditch, but the driver fled on foot. He was found shortly afterwards after attempting, but failing, to enter a vehicle nearby when the owner scared him away.

A 22-year-old man from Orillia is facing multiple charges, including operation while impaired and failure to stop after an accident.

He was held for a bail hearing this last weekend in Newmarket.

Memphis authorities released video footage Friday showing Tyre Nichols being beaten by police officers who held the Black motorist down and repeatedly struck him with their fists, boots and batons as he screamed for his mother and pleaded, ''I'm just trying to go home.'

The head of the Canada Revenue Agency says it 'wouldn't be worth the effort' to fully review $15.5 billion in potentially ineligible pandemic wage benefit payments flagged by Canada's Auditor General.

Mike Davy always dreamed of going to a Toronto Maple Leafs game, and once it finally happened, he passed away the night after.

'This is too much': B.C. mom records police handcuffing 12-year-old in hospital

A review has been launched after police officers were recorded restraining a handcuffed Indigenous child on the floor of a Vancouver hospital – an incident the Union of B.C. Indian Chiefs has denounced as "horrendous."

The World Health Organization will announce Monday whether it thinks COVID-19 still represents a global health emergency but Canada's top doctor says regardless of what the international body decides, Canada's response to the coronavirus will not change.

Canadian university professors are mostly older and increasingly more female compared to 50 years ago, a new report from Statistics Canada has found.

Hyundai cars in Canada don't have the same anti-theft issue compared to those in the United States, a company spokesperson says, following reports that two American auto insurers are refusing to write policies for older models.

Grizzlies, other NBA teams speak out on Tyre Nichols' death

The outrage, frustration, sadness and anger was evident around the NBA on Friday, the day that video was released showing how Nichols, a 29-year-old father, was killed by five Memphis police officers. Several teams released statements of support for the family, as did the National Basketball Players Association.

Video released publicly Friday shows the husband of former U.S. House Speaker Nancy Pelosi struggling with his assailant for control of a hammer moments before he was struck in the head during a brutal attack in the couple's San Francisco home last year.