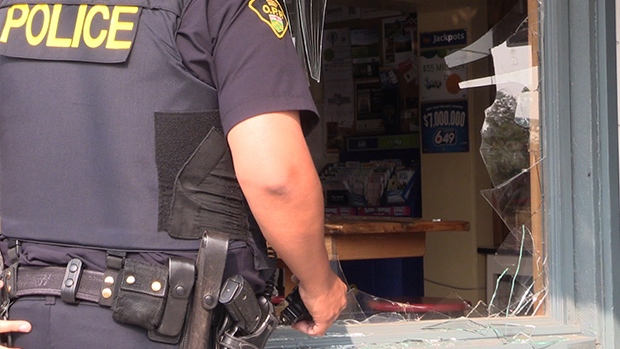 Police arrested a man accused of smashing in the front door of a business and taking prescription medications in Orillia.

According to provincial police, the 37-year-old Orillia man stole from a Mississaga Street business on Tuesday night.

They say the store's alarms alerted police to the break-in.

Police used video surveillance to identify the suspect, who they later located and placed under arrest.

Officers charged the accused with break and enter, theft under $5,000, drug possession, and failing to comply with a probation order.

He was held in police custody for a bail hearing scheduled for today.

The federal election campaign entered its final hours with party leaders making last-minute appeals in whirlwind tours of swing ridings, all while still trying to convince voters to buy into their version of what this vote is all about.

As the federal party leaders make their final push to Canadian voters, new polling data suggests that the Liberals and the Conservatives are in a dead heat.

Election primer: Everything you need to know before you vote

On election day, CTVNews.ca has you covered every step of the way.

As COVID-19 cases in Alberta surge and health-care leaders call for military aid to help beleaguered hospital staff, some are worried the latest public health measures may not help curb the fourth wave.

The idea of waning immunity has picked up steam in recent weeks, with some countries using it to justify rolling out third-dose COVID-19 vaccine boosters to their populations. But immunologists say the concept has been largely misunderstood.

Around half of surveyed Canadians say they support employers mandating COVID-19 vaccine booster shots for their employees, a new poll finds, with Canadians 55 and older being the most in favour.

An Ontario woman says Air Canada allowed her 11-year-old son to board an international flight without supervision and fly home alone.

Election day 101: Questions and answers about the voting process

From finding the right voting location to bringing acceptable ID, CTVNews.ca breaks down what you need to know before casting your ballot.

Advice for voters on the eve of election day: A Q&A with Elections Canada spokeperson Diane Benson

On CTVNews.ca: A transcript of an interview with Diane Benson, spokesperson at Elections Canada, who answered questions on reduced polling stations, how students can vote, and other challenges facing voters in a pandemic election.