Orillia cracking down on abandoned buildings; one demolished today

It took a half hour and a backhoe to get rid of a problem the City of Orillia says has been around for more than a decade.

For 12 years, the home at 116 Colborne St. E. has been abandoned. It’s one of 23 abandoned buildings in the city limits, says City of Orillia chief building official Kelly Smith.

“It’s about time the house comes down,” she says. “It’s been a real eyesore for the community.”

The City of Orillia decided to demolish the house after it was deemed unsafe because it posed a threat to neighbouring homes. The city tried but couldn't confirm who owned the home, so in the name of safety it came down.

Since there is no heat or hydro, every spring thaw the foundation slowly moves. The house is cracking and the walls are caving in. Inside the house, a structural engineer found dozens of safety hazards, including deteriorating wood posts and a buckling support beam. This isn't the only home on the block like this – there are three others. It's a problem right across Orillia and the city's chief building official is now monitoring the 23 abandoned buildings.

“It’s usually after a fire we see people leave the house behind,” says Smith, adding Monday’s could be the first of many demolitions. Since August a team of inspectors has been assessing the structural integrity of each abandoned building.

“If it's found unsafe we are going to start this process of moving towards demolition,” Smith says.

The city doesn't have to own the property because Ontario's building code allows the demolition if the owner doesn't maintain the building and there is a safety risk. She says since the buildings often have no electricity, people may light candles inside for light and warmth, increasing the risk of fire.

The Orillia Fire Department has responded to eight severe fires at abandoned buildings over the past decade.

“It's usually from people going inside to stay warm from the elements, lighting candles,” says Terry Duff with Orillia fire.

On Colborne Street, the city also plans to bulldoze an abandoned house next door and is also working with the owner of two other buildings to have them repaired or demolished.

“It will clean up the street,” says David Snell. “It attracts people in the night and they crash in these houses.”

“Hopefully down the road there will be some progress here and maybe some business,” Marcellus adds.

When the city demolishes an abandoned building, the cost will be added to the owner’s property tax bill. In this case it cost $25,000 and if the owner doesn't pay within three years the city could seize the property.

- With files from Matthew Talbot 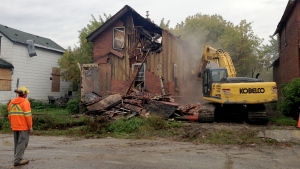