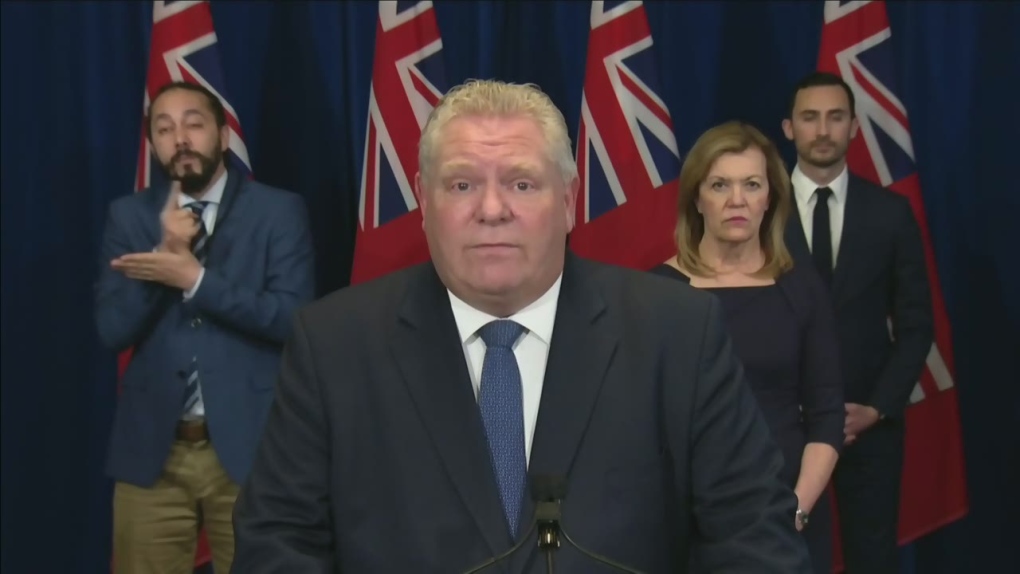 TORONTO -- Under pressure to further respond to escalating rates of COVID-19 in Ontario, Premier Doug Ford said he will unveil his government's plan to deal with a potential second wave of the novel coronavirus on Tuesday.

During his daily pandemic media briefing on Monday, Ford defended the delay in releasing the much-anticipated plan, stressing that the situation in the province has changed frequently since the first wave of the virus hit in March.

In recent weeks, Ford has promised an updated fall preparedness strategy but pressure to release the document has intensified as daily case rates have steadily increased in recent weeks -- with 425 new cases, and two new deaths, reported in Ontario on Monday.

The new plan comes as Ontario continues to grapple with long line ups at some of its 147 COVID-19 assessment centres and days after Ford announced an Ontario-wide crackdown limiting the number of people permitted at social gatherings.

COVID-19 continued to spike in three virus hot spots on Monday, with 175 new cases in Toronto, 84 in Peel Region and 60 in Ottawa.

Health Minister Christine Elliott said 67 per cent of the new cases are in people under the age of 40.

Elliott said that some elements of the new fall preparedness plan are already being implemented, including the ramp-up in testing. The second wave will be more complicated to respond to because of flu season and the need to address the province's surgery backlog, she added.

"We have planned for the worst and are ready for it," she said.

Elliott said the plan will involve "hundreds of millions" in spending, which has required the government to complete "due diligence" on the strategy.

"We have to work with the federal government to make sure that they are going to be able to release their funds in a timely manner to support those areas that we have really focused on, testing, lab capacity, and making sure that we're ready for the flu," she said.

Meanwhile, Ford said again Monday that he hopes to have a plan to permit pharmacies to conduct COVID-19 testing in place by the end of the week. The province has reached out to university and private laboratories to help process the increasing number of tests, he added.

"As we go up with testing, we want to make sure that lab capacity keeps up," he said.

NDP Leader Andrea Horwath said the province has known the potential for a second wave was real for months and should have delivered its fall strategy before the first day of autumn, which is Tuesday.

"It's pretty rich for the Premier and Minister of Health to suggest they a plan and it's already being implemented," she said. "If that were the case we wouldn't be seeing moms in line ups with sick kids for eight hours ... waiting to get a test."

Unions representing more than 75,000 workers in long-term care homes across Ontario held a news conference on Monday morning, calling on the Ford government to address what they called a "broken system" that was struggling before the COVID-19 pandemic even began.

"We are seeing an uptick in the number of COVID cases across the province and many are saying we are on the verge of a second wave, if we're not in it already," said Candace Rennick, the secretary-treasurer of CUPE Ontario.

"Sadly, in long-term care, many of us are left questioning if we've learned any lessons from the first wave of this deadly virus."

Rennick was joined by Sharleen Stewart the president of SEIU Healthcare and Katha Fortier an executive with Unifor National as well as three personal support workers. Stewart said that all three unions haven't heard or seen anything from the commission that is leading an inquiry into the state of Ontario's long-term care facilities.

Meanwhile, the Progressive Conservative government and Opposition politicians have come to an agreement to manage the number of legislators at Queen's Park during sittings to practise physical distancing.

The new cohorts will see a set rotation of some government ministers and legislators assigned to sittings of the house this fall, restricting contact between cohorts.

Premier Doug Ford, Health Minister Christine Elliott and some other ministers will not be part of the cohorts to allow them to participate in more debate.

"I would be lying if I didn't say that what we saw in Ottawa over the last week ... didn't have an impact on us working together to make sure (the legislature) continues in this fashion," he said.

Ontario Labour Minister Monte McNaughton, who announced last week that he was in self-isolation after having dinner with O'Toole recently, has subsequently said both he and his family have tested negative for the virus.

-with files from John Chidley-Hill.

This report by The Canadian Press was first published Sept. 21, 2020.