A commitment by the Ford government in its fall economic update to build the controversial Bradford Bypass is being met with both excitement and frustration.

The four-lane, 16-kilometre highway between Line 8 and Line 9 is intended to provide a shortcut route between Highway 400 and Highway 404.

Queen's Park insists the link will break up congestion in a growing region.

"This is great news for the community," says Bradford West-Gwillimbury Mayor Rob Keffer.

"For our business community, for our manufacturers, as well as for our workers that are commuting back and forth to work, they'll be able to spend more time at home with their children," he adds.

Keffer explains that there are 23 traffic lights between the 400 and 404 along a route that takes about 30 minutes to drive.

The projected drive time on the bypass is roughly 10 minutes. 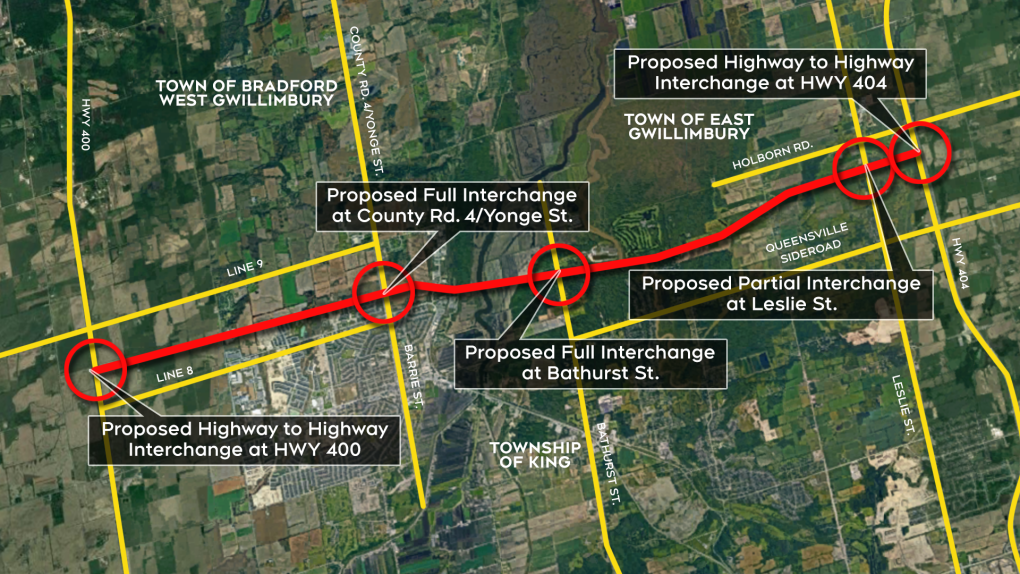 Despite many global traffic studies that suggest adding highway capacity spawns congestion rather than alleviating it, Keffer is confident the bypass would reduce drive times and greenhouse gas emissions, pointing to less time spent idling.

The dedication to building more highways is baffling to environmental protection groups.

"What we have is a government who's focused on building a government for 1950, when global leaders are trying to build the economy for the future, which is moving away from what got us into trouble in the first place," Prophet says.

"When we have Lake Simcoe that the conservation authority is saying within 50 years will become toxic because of its salt overload. The Bradford Bypass will put salt right into the headwaters," explains Prophet.

"This is a time when Lake Simcoe actually needs more help. It doesn't need additional threats and additional pollution loading."

Keffer says he's been assured by the Ministry of Transportation that people's concerns will be heard through the planning process to make the bypass "the most environmentally-friendly highway in North America."

The government earmarked $1.6 billion for the Bradford Bypass and Highway 413 in Peel Region but didn't say how much was allocated for each project.

Keffer says a call for tenders on a planned bypass interchange at County Road 4 could be issued by March to piggyback on Simcoe County's existing plan to widen the road north of Bradford.