A magical wish has come true for Lillian Pottage.

The nine-year-old from Oro-Medonte, Ont. has the keys to her brand new camper after Make-A-Wish granted the young girl's wish after she battled leukemia twice.

Following her initial diagnosis at just two years old, Lillian underwent treatment for two years and was selected as a Make-A-Wish recipient.

"Originally, Lillian was told she could have a wish when she was young, and we waited a long time to submit that paperwork," said her mother, Hope.

"We hesitated because we knew Lillian was in a good position with her health, but we knew there were other kids who weren't so lucky."

Eventually, the family agreed to proceed with the wish through the charitable organization, which gives children living with serious and often terminal illnesses an opportunity to realize their dreams.

Lillian's wish was to travel to Disney World in Florida with her family.

"I want to meet Mickey Mouse. I want to go on the spinning tea cups," the girl said from the steps of her new camper. "I want to get one of those Disney princess makeovers."

After completing her initial treatment, in January 2018, the pandemic hit and plans changed for her Make-A-Wish when air travel was temporarily removed from the list of wishes that could be granted.

"Her initial wish was a request to go to Disney as a family, and while we were in the midst of planning all of that, COVID hit in March of 2020," said her mother.

Lillian's cancer then returned in June 2020, during the pandemic when hospitals were tightening restrictions.

"I couldn't see my family. I had to get a needle, like every once an hour," Lillian explained.

"We're trying to just live in the moment and enjoy every second we can with each other because this last battle with the limitations in hospitals, on visits and having family there, it was really draining," her mom added.

Lillian persevered, and after spending at total of 1,536 days in treatment for Acute Lymphoblastic Leukemia, she is again setting her sights on a trip to Disney World thanks to Make-A-Wish and CampMart in Innisfil.

The local company recently presented the trailer to Lillian in a red carpet ceremony fit for a princess. 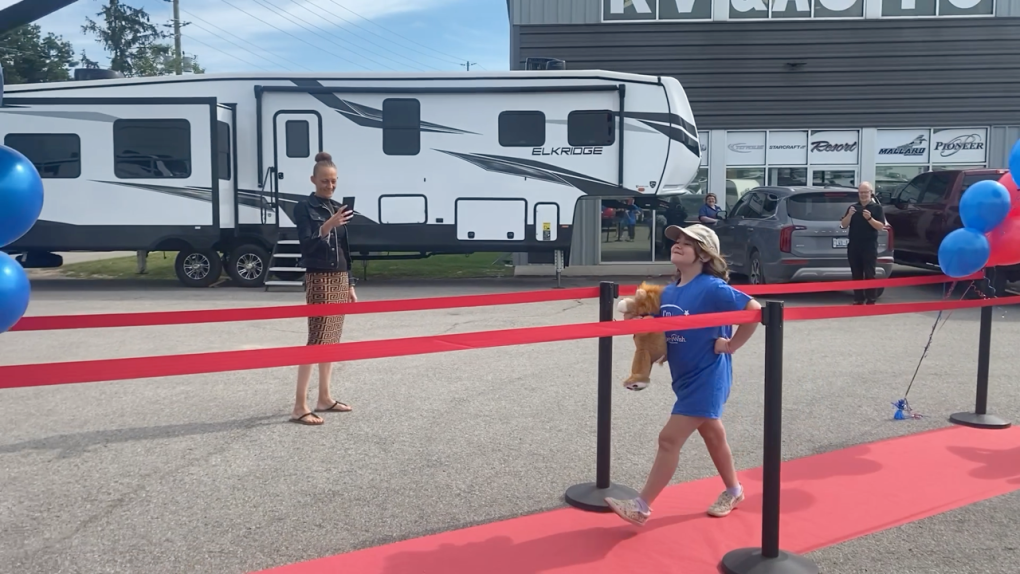 Lillian Pottage, 9, of Oro-Medonte, Ont. walks the red carpet to get the keys to her new camper. (Photo Courtesy: CampMart)

"I kept changing my mind like 'What should I get?' But in the end, I picked Wendy," the girl said, noting she named her camper after the namesake of her favourite fast-food chain.

Equipped with a large bed and two separate bunks, a kitchenette and a washroom - which she points out also has a skylight - the camper will carry Lillian, her parents and two sisters to Disney World sometime in the next year.

"It meant everything to me that we were finally getting what we wished for," said older sister Vivienne.

In June, following another two years, which included hospital visits and appointments, Lillian finished her treatment. And although she fears her cancer may one day return after already having relapsed once, her family remains committed to living life to the fullest together.

"She's always worried about the cancer coming back again now that it's come back already, so being able to have that camper and just be able to go wherever we want without that worry is so reassuring to all of us," her mother said.

Lillian now wants to reassure other children battling cancer they're not alone.

She launched a fundraiser to collect pyjamas for kids and teens in hospitals across the province, with hopes of gathering 1,536 - one for every day she underwent treatment since her initial diagnosis in October 2015.

"We're doing a fundraiser on behalf of the Tyler Robinson Foundation, and we're working alongside the Pediatric Oncology Group of Ontario to get pyjamas delivered to the five main pediatric oncology hospitals in Ontario."

The family is collecting the pyjamas through donations and purchases by classmates, friends and neighbours and has nearly met its goal.

The family has collected Love Boxes and other gifts for children and families in hospitals, particularly during the holidays.

A few years ago, York Regional Police helped hand deliver boxes to kids at Southlake in Newmarket before Christmas.

Lillian was inspired to collect pyjamas because she said it's important for kids to feel comfortable and safe during their hospital stay.

Upon learning of her cancer six years ago, her family rushed to the hospital to be by her side, where she was provided pyjamas a few sizes too big.

Her family wants to ensure children and their families have one less thing to worry about while in the fight of their lives.

"Because it's super cozy, and it's nice to stay in pyjamas all day. It was like a big hug," said Lillian.

The Pottage family plans to deliver all 1,536 pyjamas to the hospitals in September in honour of Childhood Cancer Awareness Month. Lillian's final delivery stop is SickKids on Sept. 30, coinciding with her next checkup.