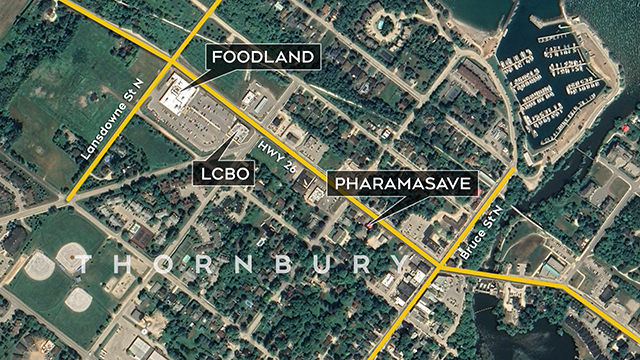 A map shows the area where three businesses were closed as a precaution on Thurs. May 6, 2021, following an online threat. (CTV News Barrie/Graphics)

BARRIE, ONT. -- The OPP closed three businesses in Thornbury on Highway 26 Thursday evening after it says a threat was made to public safety.

The OPP says the threat was made online, prompting the closure of the Foodland, the LCBO and Pharmasave as a precaution since the stores are open for indoor shopping.

The three stores were closed at six and allowed to reopen by 7:30 pm.

OPP Const. Martin Hachey tells CTV News police were made aware of a threat on the internet that indicated, "Something was going to happen in Thornbury" on Thursday night.

Police have not provided any specific details about the threat because the investigation is ongoing. They do say they believe any threat to public safety is over.