New stones added to the OPP Pathway of Memories

New stones added to the OPP Pathway of Memories

There was a mix of tears and smiles among the raindrops as 55 new memory stones were added to the Ontario Provincial Police's Pathway of Memories Monday.

"It means a lot to me to honour my dad and two of his colleagues who have been in my life since I was a baby," said Lisa Manninger, whose father worked for the OPP.

Manninger flew in from Nova Scotia to see the three stones she purchased, one of which was for her late father, Art Manninger. The other two were for his dear friends whose engravements are on either side of Art - symbolic of when the three worked together at the OPP's St. Thomas detachment.

"To be joined with Art Manninger and Bill Ryan, two other fellow officers that I served over 25 years with, means a lot," said retired OPP Det. Const. David Anderson.

"When my dad died, Bill and Dave were there to help me from day one," said a trembling Lisa Manninger.

The funds raised through the purchase of memory stones go to the OPP Youth Foundation. The money provides opportunities to young people that otherwise wouldn't have gotten them.

"The youth foundation helps Ontario youth reach their full potential through bursaries, and we offer summer camps for the youth," explained Brett Young, the new Pathway of Memories Project Lead. 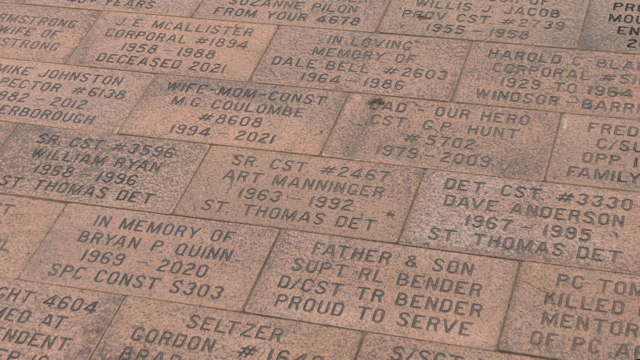 Many couldn't help but reflect at the Pathway of Memories, especially on the family atmosphere cultivated by the police force.

"He loved being a police officer, and he loved the camaraderie of the guys at the office. They are a big family," said Manninger.

"You come really close. You grieve a lot of losses. Your work keeps you extremely busy," pointed out Anderson.

This is the fourth year adding more engraved stones to the Pathway of Memories which debuted in 2017.

Like many at the 2022 ceremony who shared memories and old stories about their loved ones, Art Manninger's family and friends reminisced about the type of man he was.

"His handshake was his bond. He said what he meant, and he meant what he said. He was just a good man," said Manninger as she fought back the tears.

"Curling bonspiels and golf tournaments, it wasn't all work. It was just a great partnership that we all had," said Anderson.

The now 477 stones at the OPP General Headquarters in Orillia celebrate everything from retirements to recruiting classes.

"Friends have purchased stones for other friends. There are many meanings to the stones that we see here today," said Young.

With each stone on the Pathway of Memories come many stories to be told for those living and those who have passed.

The OPP says it hopes to recognize many more friends and members of the provincial police in the years to come.

Arrest made in gruesome 1983 murders of 2 Toronto women

A former employee of Quebec's power utility who is charged with spying on behalf of China was granted bail Monday while he awaits trial.

The Ontario government has passed housing legislation that overrides some municipal zoning laws and eliminates some development fees in an effort to follow through on the province’s goal of building 1.5 million homes.

After a surge of RSV cases among children overwhelmed hospitals across Canada in recent weeks, one infectious disease specialist explains how the respiratory virus can affect vulnerable adults.

The white gunman who massacred 10 Black shoppers and workers at a Buffalo supermarket pleaded guilty Monday to murder and hate-motivated terrorism charges, guarantying he will spend the rest of his life in prison.

An Iranian general on Monday acknowledged that more than 300 people have been killed in the unrest surrounding nationwide protests, giving the first official word on casualties in two months.