A fire has destroyed a volunteer fire hall in Mount Albert Sunday morning.

Intense flames quickly ripped through the volunteer fire hall in Mount Albert just after 8 a.m. Sunday morning. As the fire spread, the sound of the explosions rocked the community.

“The explosions were about 5 or 10 minutes apart – there was about nine of them. It basically shook the building,” said Mount Albert resident Derek Swain.

As thick black smoke billowed and fire engulfed the hall – volunteer fire fighters couldn’t get access to equipment and had to wait for crews from other stations in East Gwillimbury to arrive.

The hall is un-manned and no one was inside when the fire started. What’s left of the station was smouldering all day and while crews put out hot spots – investigators with the Fire Marshal’s Office sifted through the debris for any evidence that can help determine a cause.

“The station did have vehicles in it and that could be the source but I don’t want to get any details until we have the facts,” says East Gwillimbury Fire Chief Phil Dawson.

There were six emergency vehicles inside the hall when the fire broke out – including a brand new pumper truck.

With all of the equipment and fire trucks destroyed, many people are worried about what will happen when there is an emergency in the community.

East Gwillimbury still has two fire stations and the paramedic station wasn’t destroyed in the fire. With no one injured the mayor says maintaining the community safety is a top priority.

“Long term is whole different issue but right now it’s about making sure we have fire fighters on the scene should there be any issues in Mount Albert immediately. We have other fire trucks from other communities providing service for us,” says East Gwillimbury Mayor Virginia Hackson.

The fire chief and mayor met with officials from neigbouring towns this afternoon to come up with a plan on how to best to respond to an emergency when one arises in Mount Albert. The mayor release the plan on Monday. 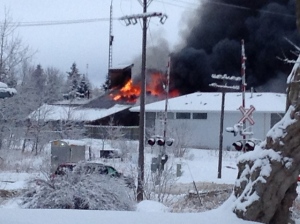