A Collingwood, Ont. father and son braved the frigid Georgian Bay waters to rescue a swan in distress.

Sarah Spoor said she noticed the swan having trouble in the water and worried she had only moments to figure out a way to help the struggling bird.

"It was literally flapping its wings constantly," she said.

Knowing the local wildlife services wouldn't make it in time, Spoor did the only thing she could think to do.

"I was panicking then, and it was getting dark and late, so I knew my husband and son would be passing my location shortly from work, so I called my husband because I didn't know what else to do," she said.

The father and son team arrived and headed straight to the shorefront.

With the snow beginning to fall, Peter and his son, James, took matters into their own hands to save the swan.

"It looked to have something orange tied around its right leg," Peter said, adding that's when James decided there was no other choice but to get into the water. 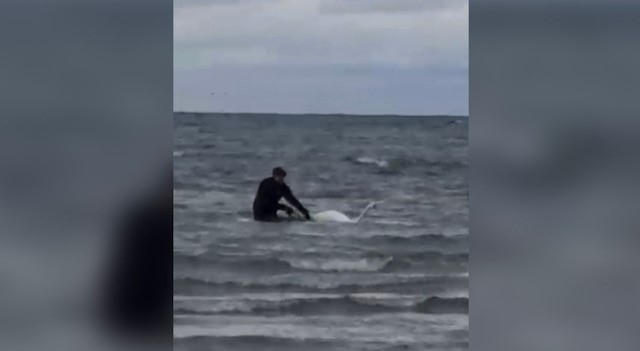 James Spoor, of Collingwood, Ont., tries to rescue a swan entangled in a buoy on Georgian Bay on Nov. 16, 2022. (Courtesy: Sarah Spoor)

Soon after, Peter joined his son, and the duo frantically tried to free the bird.

At first, the swan panicked after having been stranded and wrestling in the cold waters, but it slowly quieted and wrapped its head around Peter's waist.

It took the two 12 minutes to cut the bird loose in the hip-deep chilly water with numb legs and feet.

Relieved to be freed, the swan went on its way.

"I have no experience rescuing swans or any animals, really. I have never been in this situation before," James chuckled.

They removed the buoy that caused all the drama from the water to avoid this happening again.

Both Peter and James headed home to warm up and didn't require medical attention.

Despite their heroic efforts, the Town of Collingwood recommends calling a local wildlife rehabilitation centre or the Ministry of Natural Resources in these situations.

An assistant nursing professor at the University of New Brunswick says there is a crisis-level shortage of sexual assault nurse examiners in the country.