Memorial fly-by in Owen Sound to honour to airmen

A historic fly-by was held in Owen Sound on Friday morning to honour two local airmen that were killed in the Second World War.

All of The students at Owen Sound Collegiate and Vocational Institute poured outside into the parking lot to do stand in a 4-2-4 formation as an Royal Canadian Air Force Hercules swooped down over the school.

This historic pass was to mark the 69th anniversary of a plane crash that claimed the life of two former students of the school. Carman Watson and Curwood Armstrong were members of the RCAF 424 squadron. They died on April 5th, 1945 when their Lancaster bomber went down near the very end of the Second World War.

Brooke Whetstone is part of a small group of students who researched the two men as part of their history project.

“Curwood Armstrong is the one I mainly researched he was similar to our age. I am 19 and he passed away when he was 19. And he was from OSCVI so it was really close to home.”

Ryan McManaman is the history teacher at OSCVI. He says a group of 30 students made the trip to Lane End England in 2012 to interview witnesses and see the spot where the Lancaster came down.

“With help of a local individual Jeremy Hall who brought a metal detector to show the students there still pieces of the airplane in the ground. Of course the bodies of the seven crew were recovered and the buried at the Brookwood military cemetery which we also visited. “

The Hercules landed at Billy Bishop airport nearby so the flight crew could visit the school and members of the Armstrong Family. Captain Joel Comeault says he has done ceremonial flights before but this one was special for him and the Squadron.

“It's pretty cool, to trace down that history to present day and tracking down our squadron which is the same which is the same as these guys flew for and getting us involved and inviting us over  to do a fly past, it's great for the high school and for us as well this is something we love to do.”

A group of students from OSCVI  and Grey Highlands Secondary School will be returning to Europe this summer to mark the 70th anniversary of D-Day where they will continue their work telling the stories of Canadians who died in battle. 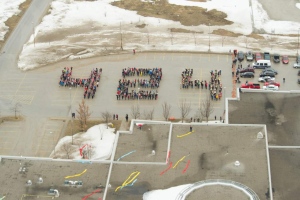