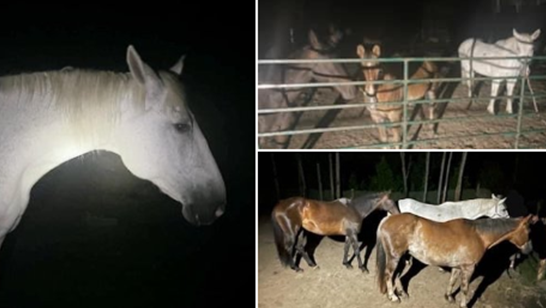 A tall blond lost in the dark reunited with family and friends. (SUBMITTED OPP)

When a female wanders off, sometimes it's best to give her a little space.

Such was not the case when an OPP officer found a long-legged beauty strolling northbound along County Road 124 in the wee hours of Monday morning.

Huronia West OPP had been called after the initial sighting and soon found a female horse they could only describe as appearing "to be alone and lost" in the middle of the night.

The officer tried to reason with her, however, police said she "refused to stop and speak with him" and ran into a nearby field.

The fleet-of-foot officer quickly engaged in a "foot-pursuit" and luckily found the white filly in a darkened corner of the field.

Initially, he said she was "spooked," but he was soon able to calm her fears and return her to her family and friends.

Canada's Evan Dunfee says he drew on the support of his loved ones to propel him to a Commonwealth Games gold medal.