Light blamed for fire at Boston Pizza in Orillia

A florescent light is being blamed for a fire at the Boston Pizza in Orillia Friday afternoon.

Owner Brad McIlmoyle tells CTV Barrie that the fire started in a florescent tube that lights the front tower of the restaurant.

The lights are automatically set to turn on at 5 p.m. every day and the fire broke out shortly after 5 p.m. on Friday.

The fire burned through part of the roof and caused water damage to the front hostess stand and Orillia Fire says damage is estimated between $25,000 and $50,000.

Contractors have been working on the restaurant all weekend but it will be at least a week before it will reopen to the public. 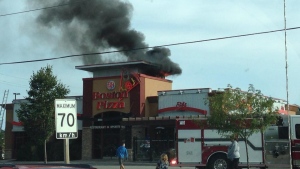