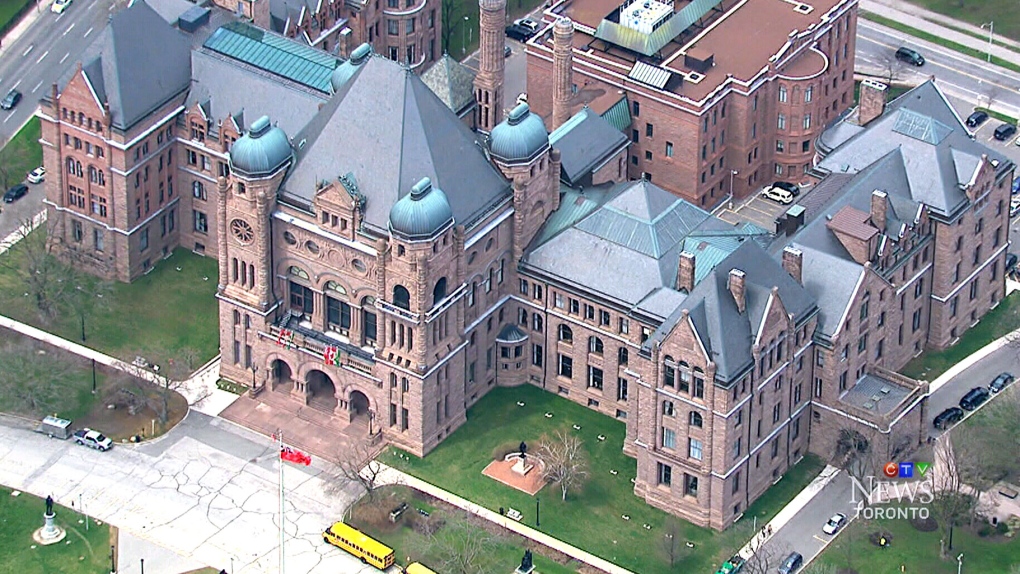 Queen's Park is seen from the CTV Toronto chopper.

TORONTO -- An Ontario government backbencher is trying to outlaw "scalper bots," computer software that scoops up blocks of tickets to concerts and sporting events and forces customers to the expensive resale market.

Liberal Sophie Kiwala, who represents Kingston and the Islands, said more often than not, tickets to popular music, sporting and theatrical events are unavailable within moments of being placed for sale online. Many fans hoping to attend the final concert by the Tragically Hip in their hometown of Kingston this month were shut out, said Kiwala.

"Devoted Hip fans in my community and across the country were discouraged to discover that tickets to attend the last ever Hip concert would simply be unattainable," she told the legislature. "The experience of the Hip concert is a story that gets repeated too often at many high profile entertainment events."

Fans are usually well prepared with credit cards and personal information so they can make their purchase the moment tickets go on sale, said Kiwala.

"Instead, they often find themselves in a frustrating pattern of refreshing the website repeatedly in attempts to gain access to tickets," she said.

The use of security bypass software -- or "scalper bots" -- allows resellers to override the feature that limits the number of tickets that can be bought in one transaction, and then put them online for resale at exorbitant prices, added Kiwala.

"I have heard my constituents say that their experiences in ticket-buying have left them frustrated and discouraged," she said. "There is simply no way in which human ability can surpass how quickly a scalper bot can purchase a large volume of tickets in only a few moments."

Ticketmaster Canada compares battling the bots to a never-ending "war against bad operators that are international," and said it has a whole division that specializes in trying to block the bots and make sure tickets get into the hands of fans.

"Data scientists are trying to stay ahead of those operators, but the game is going to be from now until the end of time," Ticketmaster Canada COO Patti-Anne Tarlton told The Canadian Press. "To think about using government legislation with any of this is really challenging because to actually police it is near impossible."

Kiwala admitted the software that enables the bots to buy blocks of tickets will keep getting more sophisticated, but said that doesn't mean giving up the battle.

"Scalper bots become smarter and smarter every day, but we should not let this hamper our attempts to ensure that anyone in Ontario who wants to purchase a ticket to an event can do so in a marketplace that is fair, transparent and accessible," she said.

The NDP said Kiwala's bill "attempts to right the wrong the Liberals created" last year when they changed the old law that prohibited tickets for events from being sold above their face value.

"That opened the door to the big players in the business with the sophisticated software," said New Democrat Monique Taylor. "The legalization of the reseller market is where the issue starts, and that's what the government needs to address."

Kiwala's private member's bill would also require that the original face value of a ticket be disclosed when it is resold.

Private member's bills rarely become law in Ontario, but Attorney General Yasir Naqvi recommended that Liberals support the legislation on second reading, which suggests it has a better chance than most of becoming law.

"I think there's a lot of support for the bill," said Naqvi.

-- With files from David Friend