A landmark on the edge of Orillia is now in ruins.

Demolition is underway on the Atherley Arms building along Highway 12 to make way for future development.

"The owners just want to clean the site up and get rid of all the garbage, and it will be a vacant lot for now," said Township of Ramara Mayor Basil Clarke.

According to Clarke, the developer's long-term plan is to build a residential 12-unit structure.

The mayor noted sewer and water infrastructure limitations as factors for the delays with the property development.

"Until we get water and sewer for the Rama Road corridor and Highway 12, unfortunately, this place just can't move forward," said Clarke.

Over the last century, the property and the several extensions and renovations of the Atherley Arms building have served as a gentleman's club, restaurant and bar. 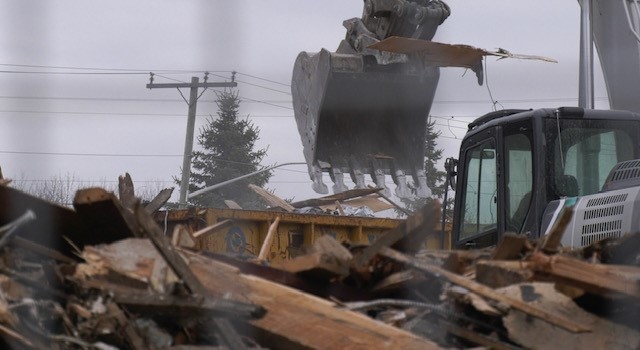 For many locals, the building served as a landmark and brought back memories of their youth.

"It meant a lot of things to a lot of different people," said Chrissy Hucker, a long-time area resident.

"Some of the old-timers will remember a time when some of the guys come off fishing from the lake and sell their white fish to pay for their beer. Not mentioning any names."

Hucker had hoped the building could have been preserved rather than left to deteriorate.

"It's been a historic landmark all my life, and I kind of miss it, and I know there was a lot of negative connotations with it, especially in the later years," said Hucker.

Many neighbours said they have been waiting for the building to be removed for years, calling it an eyesore.

According to the mayor, the building sat vacant for nearly 20 years and was deemed unusable.

Clarke said he sympathizes with those who have fond memories of the building but added it was time to move on.

"When you look at the township, and how we move forward, how we want to progress with economic development, this site has been a real eyesore. It's the first thing you see when you enter our township," he said.

According to Clarke, the council agreed to give the developer a 20-year abatement period of development charges to help speed up the cleanup process.

Two children are dead and six others are injured after a Laval city bus crashed into a daycare Wednesday morning. The driver of the bus, a 51-year-old man, has been arrested and faces charges of homicide and dangerous driving, police say.

NEW | 'There are no words': Laval daycare bus crash prompts outpouring of condolences on Parliament Hill

Condolences are pouring in on Parliament Hill after a Laval, Que., city bus crashed into a daycare on Wednesday morning, with federal politicians of all stripes expressing their sympathies with the families affected and gratitude to the first responders.

Netflix Canada is rolling out its long-anticipated plans to crack down on password sharing, saying it will begin notifying Canadian users today by email about limitations.

The Bank of Canada released a summary of its Governing Council meetings on Wednesday, providing the public and financial institutions with more insight into the central bank’s decision to raise its key interest rate on Jan. 25.

Health-care workers have new hand-washing guidelines. Here's how you can apply them

The way respiratory viruses have circulated this fall and winter, most Canadians could probably benefit from a hand-hygiene refresher. Here are the latest hand-washing best practices to apply in your daily life.

An 'awkward' attempt at a handshake between Alberta Premier Danielle Smith and the prime minister Tuesday is another example of leaders from the western province hesitating before shaking Justin Trudeau's hand, say political experts.

Killer whale mothers take care of their sons much longer than their daughters. This could be why

The sacrifices female killer whales make for their sons well after they are weaned is negatively affecting their reproductive health, according to new scientific research.

With hope of finding survivors fading, stretched rescue teams in Turkiye and Syria searched Wednesday for signs of life in the rubble of thousands of buildings toppled by the world's deadliest earthquake in more than a decade. The confirmed death toll approached 12,000.