'It was just time,' The Road Hammers new single hits the airwaves 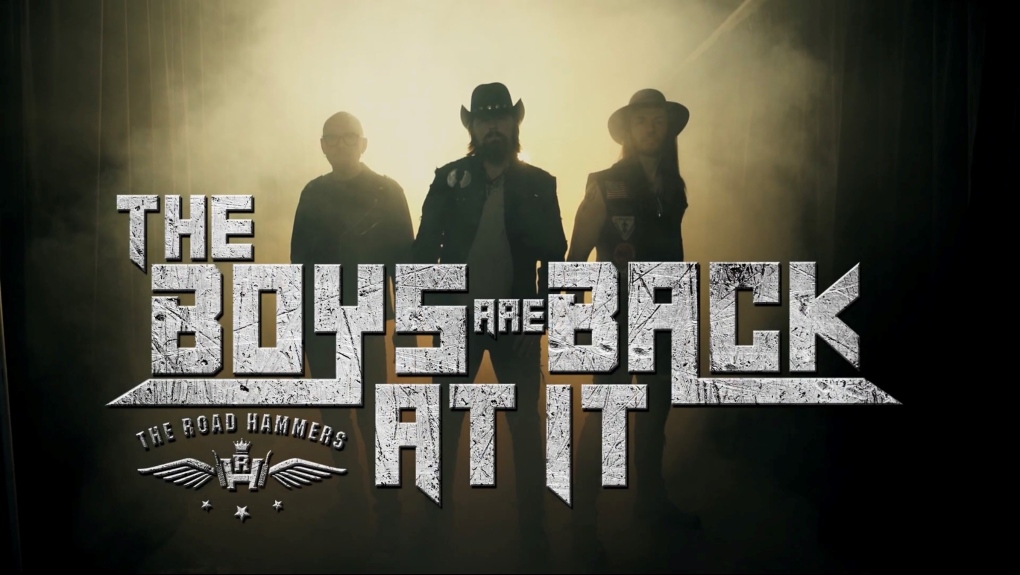 The Road Hammers have a new single out on Fri. April 9, 2021, called The Boys Are Back At It. (Supplied Photo)

Juno Award-winning trio The Road Hammers are back at it with a new single that hit the airwaves Friday.

The Canadian band, which includes Jason McCoy, Clayton Bellamy, and Chris Byrne - known for top singles, Mud, I'm a Road Hammer, and Girl on the Billboard, has released the song, The Boys are Back At It, which is the first single from a new music collection since it released The Squeeze record in 2017.

CTV's Craig Momney spoke with the former Canadian Country Music Award (CCMA) Vocalist of the Year and Pure Country 106 morning host Jason McCoy about the new song and what's next for the band.

Craig Momney: Tell me about The Road Hammers new music that out Friday.

Jason McCoy: Yeah, we've got a new single, The Boys are Back At It, and you know, this is exactly what the title says. I mean, we're back at it.

Craig Momney: Is it just one song coming out, or is it an entire album?

Jason McCoy: Well, we've got the one song coming out tomorrow, that's our first single, then we've got a seven-song EP that's going to be out later in the summer, and it's something we've been working on since, I guess, before the pandemic, so its all been recorded remotely.

Craig Momney: It's been four years since The Road Hammers released a new collection of music (The Squeeze - 2017); why this time? Why now?

Jason McCoy: You know, it was just time. We have all the tracks done, and we thought, well, coming up to summer, might as well do this, and we were starting to talk about maybe some shows when we were getting ready to release this.

We didn't foresee another lockdown; we thought we were on the other side of this thing, but you know, we're just going to sit tight, wait until its safe, but it's all about just putting out the record that we wanted to, and it just felt like this was the right time.

Jason McCoy: It's just about getting back out, like I said, getting rid of the winter, putting it in the rear-view, can't wait for the sun to shine, fire up the bike, the car, whatever you got and just getting out there and enjoying it.

Craig Momney: You said you were done writing the songs around the start of the pandemic but did the pandemic have an impact on the music as well?

Jason McCoy: I'm sure the pandemic had an impact on the single because we were all itching to get back out and just get back at it, you know, it being life, right. And we're so excited now, you know, to be able to do that, get it out on the radio.

The next stage will be getting out and performing live because that's the heartbeat of what The Road Hammers do.

Craig Momney: When people hit play on this new single, as well as the new EP when it comes out this summer, is it going to be the traditional Road Hammers sound, or is it a new sound?

Jason McCoy: Its kinda like when you know, your favourite car company comes out with a new car, and it's still the same car, you know, but it's maybe got a little different body style, its got some new technology, and all that, that's kinda how The Road Hammers are.

We always make sure we keep the heartbeat of who we are, and then we add some things in there. I think this record we're probably getting back to more of the basics and what we were doing on the very first record, but it's just fun. The Road Hammers are meant to be fun; it's meant to be turned up real loud and meant to be enjoyed.

Craig Momney: Where does The Road Hammers sound fit in with the Kane Browns, the Luke Combs, the Chris Stapletons, or the Kacey Musgraves of today's country music?

Jason McCoy: It fits in great because what we're about is the roots of all the music combined of what makes The Road Hammers. I'm the country guy, Clay's (Bellamy) the rock guy, and Chris (Byrne) is the blues guy, so those elements are in all the music you just mentioned. And then our production, you know, just changes with the times, everything's a little different.

I mean, we started out in 2005, and we've still been lucky enough to have hit records every time out, and that just comes from embracing different sounds that are out there right now.

And you mentioned Chris Stapleton, Luke Combs, these guys kind of got a 90s sound almost sometimes, and we embrace that as well.

Craig Momney: Was there a specific demographic the band was aiming for with this single or EP?

Jason McCoy: I don't know about demographics per se. I mean, we certainly want to make sure that we want to please our Road Hammer fans because they're the ones who put us where we are, so that's where that, making sure you're true to the heartbeat of the original record is.

As far as demographic, we've got fans from five years old to 100-years-old. We really have a great and broad fanbase. We have guys, girls, everybody is a fan of the hammers, and it mainly comes down to the fact that we have a restless spirit in our soul, and we want to be the soundtrack to that.

Craig Momney: Your single comes out Friday, EP in the summer; what else is next for The Road Hammers?

Jason McCoy: We've asked ourselves what is next. We see that Eric Church just announced his tour, Kane Brown announcing a tour as well, and for us, it's sitting on go for so long; we just can't wait to get out there and play again.

We've got a bunch of dates that have just been moved to 2022, but there are a few in the fall that are a go for now.

So we'll see, fingers crossed. But the next thing, it's live.