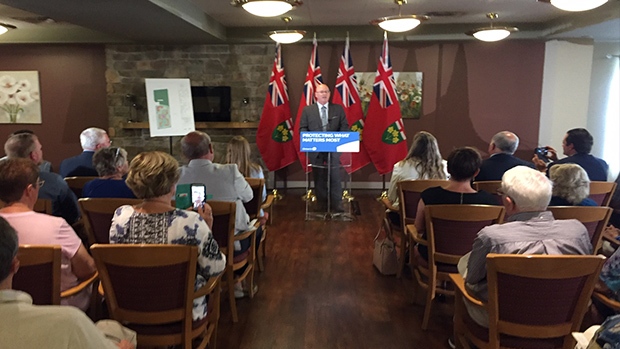 Steve Clark, Minister of Municipal Affairs and Housing, made an announcement in Barrie on Wed., July 31, 2019 (CTV News Barrie)

The province is "cutting the red tape in Simcoe County" to allow one of the largest senior living centres in the region to be built in Innisfil.

Steve Clark, Minister of Municipal Affairs and Housing, was in Barrie to announce the facility for the community's ageing population. Barrie-Innisfil MPP Andrea Khanjin joined him. "There is a waitlist of over 1,500 seniors for the thousand units here at Tollendale," she said.

Minister Clark said he had signed a zoning order to allow the Tollendale project to be built on Big Bay Road. "This is part of our government's people-first approach."

"It's going to be a great project for us," said Innisfil Mayor Lynn Dollin. "It provides good quality of life at an affordable price for residents. We know there's a need for it."

The Tollendale Village 2 project will include 388 retirement apartments, 160 long-term care beds and a 52-unit assisted living facility. The province said the centre would create close to 200 full-time jobs.

The shovels are expected to break ground late next year or by 2021.