On the shores of Lake Simcoe in Brechin, winter ice is melting. But there, it doesn’t flood, it crushes.

The ice is breaking up and moving onto the shore, pressing up against trees. In Brechin, the ice shove is as high as some boat houses and in some cases is swallowing them or smashing through them.

“We were flabbergasted when we saw the damage,” says resident Anne Pike. “It just went right through that building. You just can't stop it, when it starts to move it just keeps going.”

John Chemilien says the owners of a property are from out of town and though it’s a write-off for now, trees stopped the ice from swallowing a larger house. One ruined house will now become an insurance claim.

“The ice has been here, it's caused damage,” says Brechin resident John Chemilien. “That little house will have to be rebuilt because of all the damage inside and out.”

The power of Mother Nature is truly remarkable; one big dock was 30 feet into the water and now the ice has pushed it all the way up to the house.

And the ice is still moving.

“You can hear it moving, tinkling as it moves along,” says Blain Hughes.

He has lived on these shores for more than 30 years and says as thick as the ice is this year, there have been tougher years – and he has the pictures to prove it.

“The worst year we had was back in 1992,” he says, “when the ice came up into this corner of covered the boathouses. It went right through them, and right over top our boathouse.”

The ice remains unstable, but Chemilien says it won't be long before the neighbours help start the clean-up.

“If anybody needs help, every neighbour will come and help each other,” he says. “It's a very good community.” 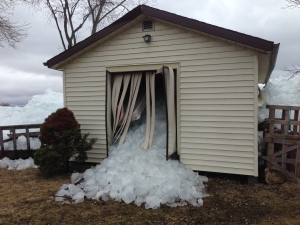 Ice on the Move