A local drive-in has been holding out, sticking with that good old film; but the switch to digital is coming.

The Muskoka Drive-In has shown movies the same way for more than 60 years: using an old film projector.

But that's not going to happen for much longer.

“There's no gun put to our head, but it’s a part of business,” says owner William Alexander. “So it's either you upgrade or fall by the wayside.”

Closing down isn't an option for Alexander. So he's biting the bullet, getting rid of his projector, and trading it in for a digital system.

“It's basically a $50,000 or $60,000 hit that we take,” he says. “We have to put in a digital projector, digital servers, then we have to retrofit our projection rooms so it's all insulated and nicely set up for the winter.”

While buying digital copies of movies will be cheaper, there are some drawbacks to the upgrade.

“If our projectors went down I would be able to fix them,” Alexander says. “If the digital goes down I would have to wait for a guy to come in from Toronto and I'm hoping he's not too busy, and I'm hoping it's not a long weekend because I lose my shows until he gets up here and fixes it.”

Keith Stata at the Highlands Cinemas in Kinmount knows all about these kinds of problems. Last summer his theatre had a digital make over. It was a big and expensive gamble for a movie theatre that relies on summer traffic.

While the old projectors are bulky and big, Stata says they were built to last. When it comes to their computer counterparts, he says a digital system won't hold up the same way.

Alexander has set up a crowd funding campaign to help raise the money needed for his upgrade. Until then he'll keep showing movies the old way: splicing together the film until a computer takes over.

“I will miss it,” Alexander says. “But it's like everything in life, everything evolves and this is the next step in evolution.”

The Muskoka Drive-In will start the season on film and then switch to digital once there's money to pay for it. Meanwhile, Alexander says he's going to open up the projection room so people can see the old technology before it goes away. 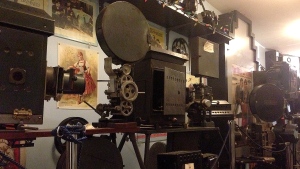 Inside Kinmount's Highland Cinemas and the Muskoka Drive-In