As Barrie Councillors continue to discuss whether or not to endorse 90 Mulcaster Street as the city’s safe consumption site (SCS) as proposed by the health unit, health officials are working ahead.

The Simcoe Muskoka District Health Unit stands behind its preferred site choice but has compiled a list of 10 other locations within the city. It includes:

But Mia Brown with the health unit said none of the sites measure up to what the Mulcaster location can offer. “It is really the only one that has the wrap-around services for addictions and treatment,” she said. “It’s also located where drug use is already happening, and that is one of the criteria from the Ministry of Health and Long Term Care.”

And clergy within the United Church of Canada agrees, having thrown its weight behind the proposed SCS at 90 Mulcaster Street. “We are representative of a very large population of this community who are all together and understanding that there is a need in the city of Barrie, that people are dying,” said Jeffrey Dale, United Church of Canada.

After the Barrie council meeting last week where several residents expressed their opposition to the site, 13 religious ministry officials who live or work in the city drafted a letter to council highlighting their support.

It reads in part, “We support the 90 Mulcaster Street location for the SCS because of the counselling and addictions services offered on-site by the Canadian Mental Health Association and also because we recognize that those most in need, such as people at the David Busby Centre, are close by. We hope that the City Council of Barrie will support a site that offers intervention and treatment possibilities.” 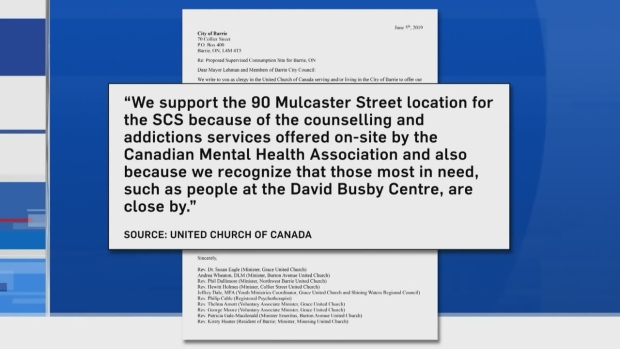 Dale said they wrote the letter to ensure the city was aware that there are people who believe 90 Mulcaster Street to be the best choice.

The health unit will continue to explore other possible supervised consumption sites in the city and plans to have all the information prepared to present to council at the June 24 meeting.