“He crossed the line.”

For the second time this year, social media posts are coming back to haunt a Barrie city councillor. Keenan Aylwin was criticized in February by the Barrie Police Association for a tweet he made months earlier about a suspect who died while in police custody. 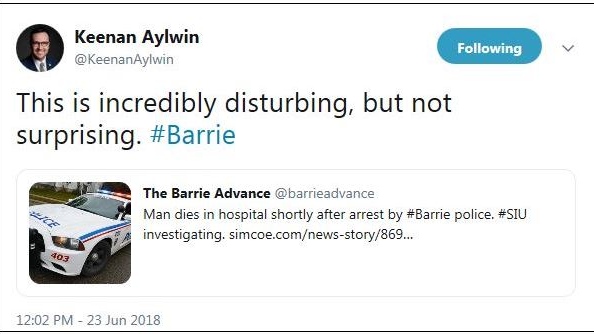 This time, a Facebook post has the councillor facing legal action after the city’s integrity commissioner ruled Aylwin went too far and breached the city’s Code of Conduct.

The controversial post was made on March 21, just days after the horrific mass murders at two mosques in Christchurch, New Zealand.

He wrote about his outrage, linking racist rhetoric with violence and directly referenced Barrie-Innisfil MP John Brassard and Barrie-Springwater-Oro-Medonte MP Alex Nuttall, calling on them to denounce white supremacy.

The post reads in part, "We have two Conservative MPs in Barrie that have been silent on their leader's appearance on the same stage as a neo-Nazi sympathizer.  This is unacceptable and it is dangerous. They are playing footsies with white supremacists who have inspired violence through Yellow Vest Canada social media channels and elsewhere."

Brassard responded immediately by filing a complaint against the Ward 2 Councillor.

“I was shocked,” Brassard said. “What’s shocking, as well, is I’ve had interactions with Councillor Aylwin for a minute. I met him at the council inauguration and at a public event, and the course of our interaction has only lasted a minute.”

The Barrie MP said he’s received support from the community he’s served for 15 years and from other city councillors. “He had no right to do what he did. They found his comments vile and repugnant.”

In her report, Integrity Commissioner Suzanne Craig calls Aylwin’s statements 'offensive, derogatory, and highly partisan,' and says his comments are “wholly inappropriate and discreditable for a member of council.”

Brassard says the councillor’s comments have tarnished his reputation. “I don’t represent anything like the characterization that he portrayed on his Facebook page. That’s the thing that I took offence to. For him to take a shot like that, without knowing me, that’s what I took offence to the most.”

In documents obtained by CTV News, Aylwin wrote to the commissioner denying that the content of his post was defamatory stating that “the statements, while strongly worded, were not discourteous, offensive, or aggressive, are my honest understanding based on information known to me.”

She also suggested city hall review and strengthen its policy governing the appropriate use of social media. Brassard agreed. “We’ve resorted to name-calling. We’ve got to stop this, this name-calling. We’ve got to stop this low-level political discourse so that people can be free to express their views without being called something, without being labelled something.”

Councillor Aylwin says he will address council and his constituents about this issue at the general meeting on Monday.

Both Brassard and Nuttall filed civil lawsuits against Aylwin claiming defamation, each of them seeking $100,000 in damages. Nuttall had previoiusly discontinued and placed a hold on his defamation lawsuit, his lawyer telling CTV News they were waiting for the conclusion of the integrity commissioner's report. On Thursday, the MP filed a new statement of claim at the Ontario Superior Court of Justice.

Aylwin says he has retained legal counsel and will be filing a statement of defence.

- With files from CTV's Beatrice Vaisman