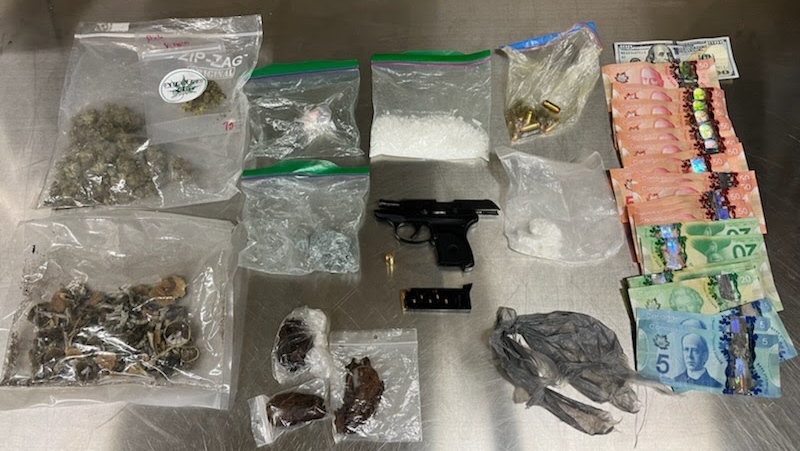 Police display evidence, including a handgun and drugs, allegedly seized during a traffic stop in Innisfil, Ont., on Tues., Sept. 20, 2022 (South Simcoe Police)

South Simcoe Police say an officer on patrol in the area of Yonge Street and Innisfil Beach Road pulled the vehicle over for a traffic violation around 2 a.m. Tuesday.

"The officer detected an odour of marijuana and observed drug paraphernalia in the front seat area," police stated in a release.

Along with the loaded gun, officers allegedly seized ammunition, cash and drugs, including suspected cocaine, heroin, methamphetamine, and bags of marijuana.

"There is no such thing as a routine traffic stop, and this incident is a good example," police noted in the release.

The two accused, ages 25 and 38, face a total of over 30 weapons and drug-related charges.

Both were held for a bail hearing.

BREAKING | Arrest made in gruesome 1983 murders of 2 Toronto women

A former employee of Quebec's power utility charged with spying on behalf of China has been freed on bail while he awaits trial.

The white gunman who massacred 10 Black shoppers and workers at a Buffalo supermarket pleaded guilty Monday to murder and hate-motivated terrorism charges, guarantying that he will spend the rest of his life in prison.

WHO renames monkeypox as 'mpox'

The World Health Organization announced Monday that 'mpox' is now the preferred name for monkeypox.

Prime Minister Justin Trudeau will visit a First Nation in Saskatchewan that was rocked by a deadly stabbing rampage nearly three months ago.

With a cost estimate of $4.38 billion, remediation of the Giant Mine, one of the most contaminated sites in Canada, is also expected to be the most expensive federal environmental cleanup in the country's history.