Georgian College takes steps toward Truth and Reconciliation through a new Indigenization strategy launched this week.

The six pillars are Truth and Reconciliation, leadership, representation, community engagement, curriculum and pedagogy, and cultural enrichment – all under the visual representation of an arbour.

An arbour is a familiar structure for Indigenous peoples used in the central area of a Pow Wow.

"It will be a guiding document for all of us in the Georgian community as we journey together toward a period of reconciliation, and I'm privileged to be part of this journey."

"It's important to me that reconciliation isn't a performative act but an authentic step forward," Weaver said.

"We expect to see more positive and mindful changes across the college as we launch this new Indigenization strategy and move forward on the journey of Truth and Reconciliation.

"Georgian is a learning institution, and we're here to grow – both students and employees. Together, with Indigenous partners, we'll all continue to learn and unlearn."

The college has several initiatives it hopes to achieve shortly as part of the new two-year Indigenization strategy.

Initiatives include "establishing an E-Zhinoomaagejig Reconcili-action Guiding Circle, rolling out a 4 Seasons of Reconciliation learning module for employees and a revised recruitment plan that increases self-identified Indigenous college employees," as stated in a recent press release.

Other initiatives include "meaningful integration of Indigenous content across all academic areas, and an increased physical and virtual presence of Indigenous languages, values, peoples, ways of knowing, symbols, esthetics, and procedures."

Anishnaabe artist and visual storyteller Emily Kewageshig recently unveiled her painting - Across the Horizon - which is on display at the Owen Sound campus. 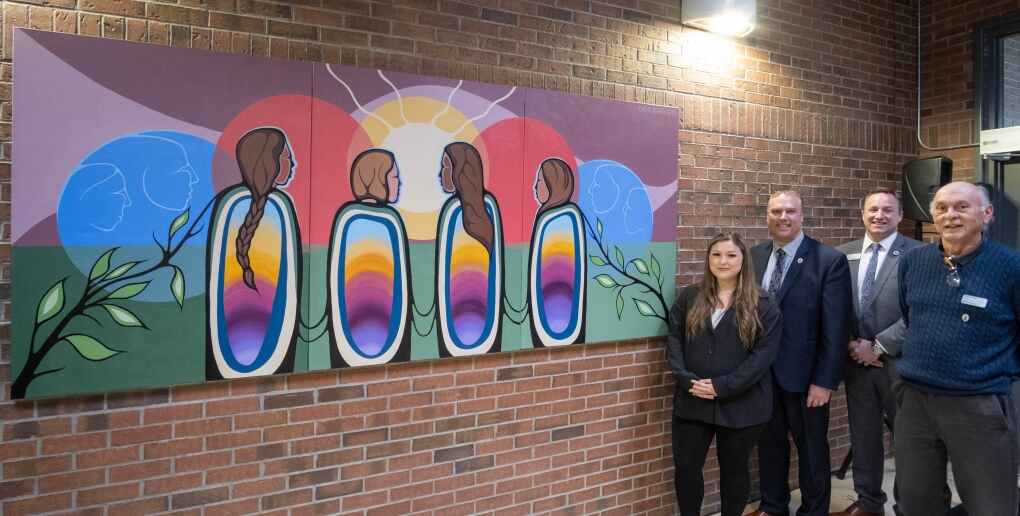 Georgian College unveils new Indigenous artwork at the Owen Sound Campus to coincide with the launch of a new Indigenization strategy. The artwork was created by Anishnaabe artist and visual storyteller Emily Kewageshig. (Provided/Georgian College)

Once the two years are up, the college will determine its progress and what it plans to do next.

The first battle tank from Canada destined for Ukraine lands in Poland, advocates come together to help sailors who have been stuck for months in a Quebec port, and Beyonce becomes the most decorated artist in Grammys history. Here's what you need to know to start your day.