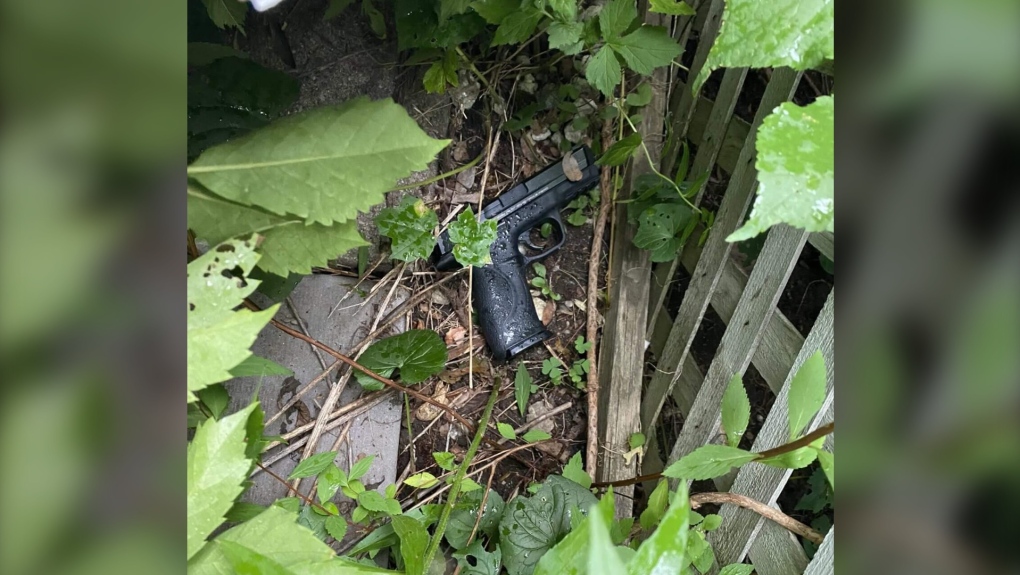 The gun Barrie police says was discard at a Steel Street home during a pursuit on Saturday, July 31, 2021 (Courtesy Barrie Police)
Barrie -

Four men and a young male from Toronto face several drug-related and property-related charges after police responded to reports of a break and enter in the city's north end on Saturday morning.

According to police, officers arrived at the Melrose Avenue home around 8:22 a.m. to find the rear screen door open. When officers entered, police say the five suspects immediately fled the home, leading police on several foot pursuits, including a canine track, but were all arrested and taken into custody.

After a further investigation, police say one of the men discarded a firearm during the pursuit, which a homeowner later found on Steel Street around 3 p.m.

The four men and the young male now face several drug and property charges; one of the adults also faces several firearm charges.

Two men and the young male remained in custody of a bail hearing on Sunday, while the other men were released and are scheduled to appear at a later date.

Police believe this was an isolated incident.

Shandro out as Alberta health minister in Kenney cabinet shuffle

A magnitude 5.9 earthquake caused some damage in suburban Melbourne on Wednesday in an unusually powerful temblor for Australia.

A month after a dramatic and harrowing scene at the Kabul airport that saw hundreds of Afghans chasing a U.S. military aircraft -- some clinging to its sides – at least one family is seeking justice for a loved one who fell to their death.