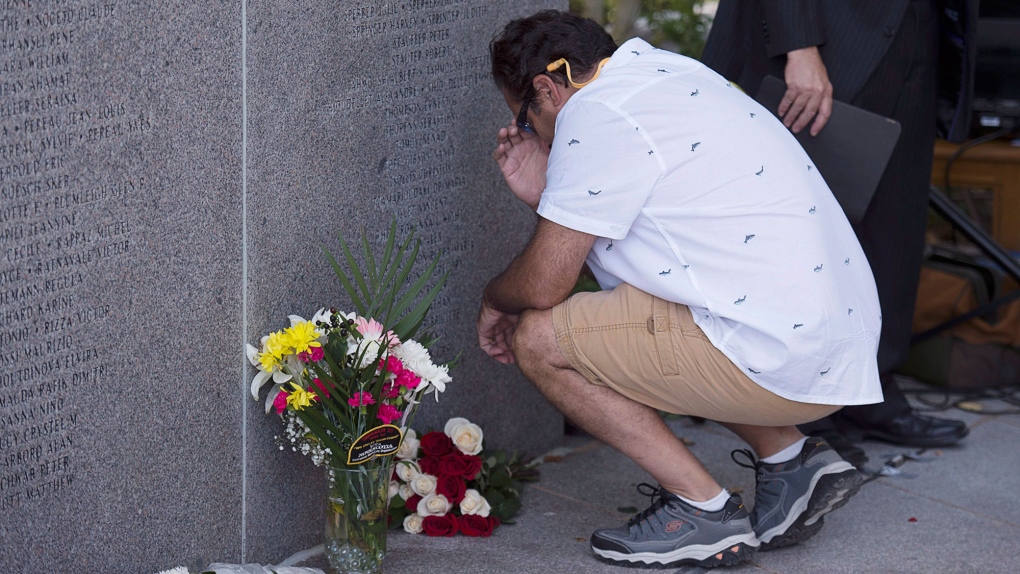 Stephen Thompson, from Atlanta, Ga., remembers his father Ernest Thompson who perished in the crash of Swissair Flight 111 at a memorial service at Bayswater Beach, N.S. on Sunday, Sept. 2, 2018. THE CANADIAN PRESS/Andrew Vaughan

Stephen Thompson clutched a tissue Sunday afternoon, unable to hold back tears during an emotional service honouring his father and 228 others who died in a horrific airplane crash 20 years ago.

Thompson attended the service along with others who lost loved ones when Swissair Flight 111 from New York City to Geneva crashed into Nova Scotian waters on the evening of Sept. 2, 1998, leaving no survivors.

"He was my best friend," Thompson said.

"Still, to this day, whenever I come back or think about it, it brings back memories of that night, but I have some great memories as well. The good memories are what I really focus on, but every now and then it comes back," he said.

Thompson said he was thankful for all the people who tried to help, and did help following the crash.

"I can't believe the number of people that are here today," he said. "It meant a lot."

During the service at the Swissair Memorial Site in Bayswater, N.S., Rev. Louis Quennelle of the Anglican Parish of Blandford told the dozens gathered for the ceremony that while the events of that night were tragic, they helped bring many communities and friendships together.

"The lessons of Swissair were many ... One of the lessons taught is that the world can be a very small place. Tragedy touched people in different ways from all around our little blue planet," he said.

Quennelle noted that it's important to remember the first responders who helped in the immediate aftermath of the disaster, saying they "took part in what was originally thought to be a rescue operation, but quickly became one of search, and recovery, and investigation."

Greg Cainen, who was a Halifax Regional Police officer at the time, said the night of the incident is still fresh in his mind.

The MacDonald Bridge between Halifax and Dartmouth was closed that evening, and Cainen was tasked with getting it open to receive ambulances from the disaster, before officials knew the extent of the crash.

"I spoke with the foreman of the company, and I said: 'There's been a tragedy and we need the bridge for ambulance traffic.' He promised it would be open within 30 minutes, and it was," Cainen said Sunday.

"I radioed to another one of our members and I said the bridge was open and ready to receive ambulance traffic. And there was a short pause in his response, and he just said, 'There are no survivors."'

Two days later, he was sent to patrol Peggy's Cove -- a popular tourist attraction where another Swissair monument located -- to ensure the family members of the victims didn't attempt suicide on the slippery rocks "to be with their loved ones."

"When I go there today, I picture checkpoints, I picture helicopter landing zones. It's just different for me," he said.

While he said he doesn't deal with any long-term effects from his work in the aftermath of the Swissair crash, he knows several first responders who live with Post Traumatic Stress Disorder.

Claire Mortimer, who lost her father and stepmother in the crash, said she's heard of at least two suicides by people involved in the recovery efforts, noting that while the pain of her loss has largely healed, some of the people who helped recover the bodies of the victims may still be dealing with the psychological toll of their grisly duty.

"This is a tragedy as much as the plane crash was a tragedy," she said, referencing one of the men who died by suicide.

"I consider people such as (the man,) who took their own lives as a result of their involvement in the Swissair site, to be a victim of Swissair as much as my father. These people need to be recognized and cared for."

Mortimer, a nurse practitioner who specializes in Post Traumatic Stress Disorder therapy, said she hopes to get in touch with first responders who worked at the site of the crash, as well as anyone else in the community who may have been affected, to help those who may be struggling connect with the resources they need.

Although she lives in Maine, Mortimer has travelled to Nova Scotia so many times she considers it as a second home.

She said the support from the province was instrumental during her healing process.

"It just was such a warm, loving experience, to be embraced by so many people," she said, adding that she, in turn, wants to help others affected by the crash heal in their own way.

Of the 229 people who died, 14 were crew and the rest were passengers, most of whom came from the U.S., France, or Switzerland.

Approximately 2,800 people were involved in the recovery and some 200 divers ventured 55 metres below the ocean surface in search of human remains and parts of the aircraft.

The disaster, which began with an electrical fire that spread through the cockpit and caused a catastrophic failure, eventually led to improved safety measures on planes, including certain flammable materials no longer being used on aircraft.

Vic Gerden led the investigation for the Transportation Safety Board, in what would become one of the costliest and most complicated probes in the history of aviation disasters.

In 2003, he released a 337-page report that concluded the fire started when an arcing wire ignited a flammable insulation covering, or MPET, in the ceiling. The report included 23 recommendations on everything from flight recorders and material flammability to in-flight firefighting and what pilots should do if they smell smoke.

In a statement last week, Gerden said 20 of those have led to improved safety measures on planes.

"Perhaps the most significant change is that certain flammable materials such as MPET are no longer used in aircraft, reducing the risk of in-flight fires," he said.

Also, air crew are now trained to "quickly start planning for immediate landing until they are assured there is no fire threat to the aircraft or occupants" when smoke is detected.