Downburst believed to be cause of storm damage in Collingwood

A band of thunderstorms caused significant damage to trees, power lines and even buildings.

Environment Canada says winds peaked at 115 km/h at the Lake Simcoe Airport. The storm also brought down hail that ranged between two and four centimetres in diameter.

Emergency crews are responding to a number of storm related calls. One of the hardest hit areas was around Collingwood, where firefighters are dealing with downed trees, power lines and damaged buildings.

Several buildings in the area of Ronell Crescent were damaged in the storm, including Mr. Transmission which had its roof torn right off. There have been no reports of injury.

Environment Canada says a downburst is believed to have hit the Collingwood area. All severe thunderstorm warnings and watches have ended.

Hydro One is reporting power outages for thousands of customers. To get an update on restoration you can click here. 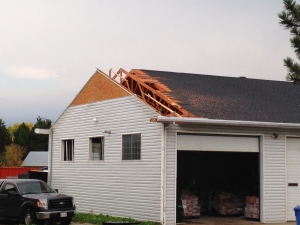