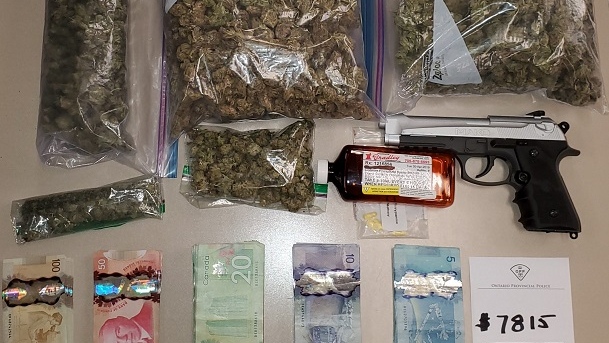 BARRIE -- Three teenagers from Sudbury have some explaining to do to their parents.

The trio was stopped on Highway 400, allegedly driving more than 50 kilometres above the speed limit north of Barrie.

An officer with the Orillia detachment of the OPP pulled them over, and allegedly found bagged pot, more than $7,000 in cash, some pills and a pellet gun inside the vehicle.

Two adults and one minor were taken into custody.

The accused face charges related to possession of marijuana with intent to distribute under the Cannabis Act.

Three Sudbury teens charged under the Cannabis Act after they were stopped, by the #OrilliaOPP, doing 156 km/hr in a posted 100 km/hr zone on #Higway400. Money, Cannabis, a pellet gun and unknown pills were seized. Teens release on an Undertaking. #trafficcops^mh pic.twitter.com/UQfGnOVfrO

The OPP says once the pills are tested, there could be more charges laid.

The driver of the car was also charged with stunt driving. His vehicle was seized and impounded for 7-days.

All three were released with a future court date.